Porto Alegre stadium may not be ready in time for World Cup, says mayor 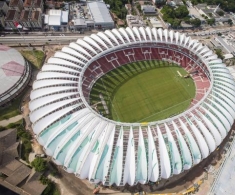 Mayor José Fortunati of Brazil's Rio Grande do Sul state capital Porto Alegre fears the city may not be ready in time to host this year's World Cup.

With the event's kick off less than three months away, the construction of temporary structures near the city's Beira-Rio stadium has not even started. Worst of all, the 20mn-30mn reais (US$9mn-13mn) in funds needed to carry out the work are not available, the mayor said during an interview on local radio station Radio Gaúcha.

On top of that, there is no plan B, he added, according to World Cup news site Portal 2014.

Currently, the city is awaiting the approval of a law permitting the exemption of interstate sales tax ICMS - for work up to 25mn reais - for companies building the temporary structures.

Among the necessary structures needed to host the event are facilities for media, energy, IT and security.

Works will demand US$40mn and be carried out by Coesa Construção e Montagens.

How to modernize Brazil's transport matrix

Want to read more information about Porto Alegre stadium may not be ready in time for World Cup, says mayor?