Samarco no longer expects operations to resume this year 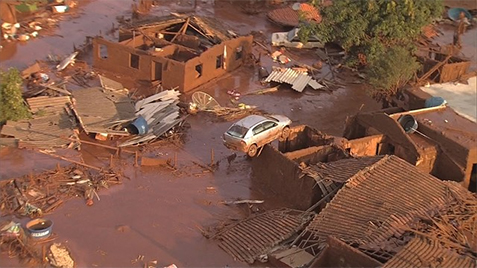 About 1,200 jobs will have to go in the states of Minas Gerais and Espírito Santo as a result.

On Wednesday, the company met with local unions to explain the situation following a second round of layoffs. At the meeting, Samarco's head of human resources, Benedito Waldson, said the company did not rule out the possibility of another 1,800 layoffs, local paper Diário do Comércio reported.

Operations have been paralyzed at its Germano iron ore complex in Minas Gerais since November's deadly tailings dam disaster.

Embattled Samarco had said previously it expected to restart pellet production at the complex by the start of the fourth quarter.

In late-May, Samarco managed to obtain an operating license from the city of Mariana, in Minas Gerais, but federal and state operational licenses are still pending.

Samarco is a 50:50 JV between Australia's BHP Billiton and Brazilian miner Vale.

In related news, Vale said it will not financially support Samarco if the company fails to resume operations, Reuters reported on Thursday.

Vale's investor relations head, Rogerio Nogueira, told analysts in São Paulo he did not believe Samarco would need financial support, but in the event its mine was unable to get permission to restart, Vale would not fund Samarco, the report said.

A compensation agreement was reached on March 2 between Samarco, Vale, BHP, the federal attorney general of Brazil, the states of Espírito Santo and Minas Gerais and other public authorities. Under the deal, in the event Samarco fails to comply with the terms, Vale and BHP Billiton will be liable to cover their respective shares.

Miners must consider the changes in their reports to be filed by March.

Want to read more information about Samarco no longer expects operations to resume this year?