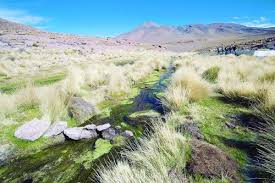 The International Court of Justice in The Hague declared the Silala River an international waterway and ruled that Chile does not have to compensate Bolivia for using its water.

Bolivia claimed it is entitled to compensation because the 8.5km river originates in the country. Some 4.7km are in Chilean territory.

BNamericas presents the timeline that led to the ruling.

In parallel, the ICJ processed a case by Bolivia demanding Chile negotiate sovereign access to the Pacific Ocean.

Chile’s then-president Michelle Bachelet responded her country will file a counterclaim if Bolivia moved ahead with its Silala demands, seeking to get the river declared an international resource.

Anticipating Bolivian action, Chile sued Bolivia and filed a request with the ICJ to declare the river an international resource.

Chile also asked the court to confirm Bolivia’s obligations to cooperate on the river’s conservation and take measures to prevent damage to Chile resulting from Bolivian activity.

Bolivia announced a countersuit, claiming the Silala River is actually a spring that was artificially diverted into Chilean territory a century ago and that Chile has to compensate Bolivia for using its waters.

The court ruled in Chile’s favor regarding access to the Pacific, saying Chile was not obliged to negotiate.

The court suspended all proceedings related to the claims due to the COVID-19 pandemic.

It also urged both countries to cooperate on river protection.

In response, Chile’s President Gabriel Boric said in a statement the road is now clear to improve relations with Bolivia.

Rogelio Mayta, Bolivia’s foreign minister, said the ruling is being analyzed, and that the ICJ clarified Bolivia is entitled to use the water, state agency ABI reported.

Chile is facing a severe drought that has affected mining. Desalination plants are a solution to maintain and increase production, while complying ...