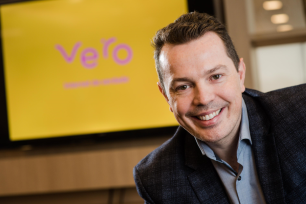 Brazilian internet service provider Vero is in negotiations with investment funds to support its rapid expansion through the entry of a new partner, CEO Fabiano Ferreira (pictured) told BNamericas.

The talks have mainly taken place with foreign funds, notably those that already operate in Brazil’s telecom sector, Ferreira said. There is no deadline for closing a deal, but it is possible that a new equity investor could be unveiled in the coming months, he added.

Vinci created Vero through the consolidation of eight ISPs, most of them operating in the country’s southern states.

Since its creation in 2019 Vero has acquired 17 firms, with the latest deal announced last week when it purchased Renovare, an ISP based in Rio Grande do Sul. The transaction’s financial terms were not disclosed. The closing of the deal is slated for early July, said Ferreira.

In January, Vero wrapped up the acquisition of Minas Gerais-based Giganet, a transaction that had been unveiled last November.

Vero is targeting around five ISPs for new acquisitions this year, and with some of them it has already secured exclusivity agreements in terms of the negotiations, he said. These upcoming deals represent a potential of around 200,000 new customers for Vero and include regions where the company is currently lacking a presence, said Ferreira.

Vero is now present in 43 cities in the states of Minas Gerais, Paraná, Rio Grande do Sul and Santa Catarina. Since its early days the company has pursued a growth strategy that is a combination of organic growth and acquisitions.

“We will speed up our pace in the coming months, with the goal of reaching 20 more cities," said Ferreira.

Net additions were 35,400, for an average of 11,800 new customers per month, twice as many as the additions in the same quarter last year.

Vero is the fifth biggest ISP in the country in terms of accesses, according to figures from sector regulator Anatel. And in Rio Grande do Sul it is the largest ISP, only trailing the country’s three large telcos, Claro, Telefônica Brasil and Oi, in the fixed broadband segment.

In Santa Catarina, the biggest ISP is Unifique, whereas in Minas Gerais Algar Telecom is the leading player.

Part of Vero's recent acquisitions have been funded through 350mn reais (US$73.9mn) from local bonds known as debentures that were issued in November.

Overall, the company is in a good cash position, said Ferreira.

Vero registered as a public company with Brazilian securities regulator CVM at the end of 2021, but its shares are still not listed on the stock market.

The company filed an IPO request with CVM earlier this year, but withdrew it amid unfavorable market conditions.

This year no Brazilian company has made an IPO due to the adverse conditions.

In comparison, almost 50 firms went public last year with more than 20 IPOs in the first three months of 2021.

Ferreira said he believes market conditions could turn more favorable again next year for an IPO.

Another strategy the company uses to finance its expansion is contracts with neutral fiber networks. It allows Vero to exchange capex related to network deployment for a cost of renting the existing network from a third party.

Vero was the first ISP in Latin America to bet on this model, according to Ferreira. It closed a contract last year for some cities in Minas Gerais with V.tal, the neutral network created by Oi with GlobeNet and funds managed by BTG Pactual.

As the model proved to be viable, Vero is now working on new contracts for the use of V.tal's infrastructure in other cities and regions. V.tal is deploying fiber at a rate of 400,000 homes passed per month. Vero, according to Ferreira, is moving at a rate of 100,000.

In addition to V.tal, Vero is also negotiating with FiBrasil, a neutral network created by Telefónica and Canadian fund CDPQ, and with I-Systems, which belongs to TIM and tower company IHS.

These deals will be complementary to the organic expansion and acquisitions, and they will be focused on cities where there is little economic incentive for greenfield operations and M&A, said Ferreira.

Investments amounted to 141mn reais in the quarter, with 96mn going to acquisitions.

Last year, the company invested 555mn reais, of which 361mn went to M&A, and the investment plan for this year is similar, Ferreira said.