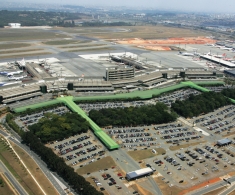 Brazilian engineering group OAS is selling the 24.4% share it has in local infrastructure firm Invepar but, according to local media, prices offered continue to slide.

However, in late July, the management company was reported to be offering 1.5bn reais. This is even less than the 2.2bn reais it had initially hinted it would offer.

The drop was due to a due diligence check of Invepar's operations in which Brookfield found that more investment was needed to adequately sustain the infrastructure firm's business.

As Brookfield's latest offer is 650mn reais below the 1.85bn reais OAS is willing to sell its stake for, no deal has been made, Valor Econômico said.

As well as various highway and metro concessions in the São Paulo metropolitan region, Invepar is the partial concession holder of the state capital's Guarulhos international airport (pictured).

It also controls water services companies Samar in Araçatuba and Sagua in Guarulhos, both of which are also in São Paulo state.

The company also holds contracts for the Grêmio, Dunas and Fonte Nova soccer stadiums in the states of Rio Grande do Sul, Rio Grande do Norte and Bahia, respectively.

Finally, it has a stake in the Enseada shipyard in Bahia state, Porto Novo port in Rio de Janeiro state, OAS oil and gas, and various housing projects.

Impacted by the fallout from Brazil's so-called Lava Jato (Car Wash) corruption probe which has targeted national oil firm Petrobras as well as OAS and many other large Latin American engineering companies, OAS was forced to file for bankruptcy protection in April for nine of its companies.

The group is also expecting revenue to drop 25% this year.

Among others, the French company is evaluating participation in Rio de Janeiro state's sanitation tender and is looking for solid waste opportunities.