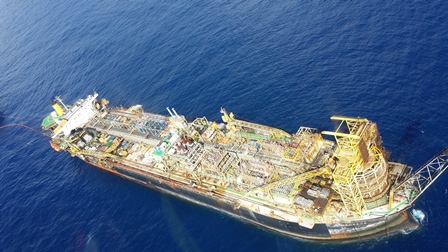 The high price and the fact that Petrobras would remain the operator are likely to be behind the decision to abort the sale process of the Marlim offshore hub operated by the Brazilian federal oil company, local sources told BNamericas.

The setback is the second for the state-run firm’s upstream divestment program in less than three months, following the failure to sell the Urucu project.

Located in deep waters of the Campos basin, off the country’s southeast coast, the Marlim complex comprises the Marlim, Marlim Leste, Marlim Sul and Voador fields, which together produced 225,000boe/d in January, according to watchdog ANP.

Petrobras began the sale of half of its 100% stake in Marlim in November 2020, and, a month later, launched the non-binding phase, where potential buyers receive guidelines for preparing and submitting proposals. But the process never got to the final stage, where bids are presented.

In a statement on Monday, Petrobras said that, considering the alignment of the concessions with the company's strategy and the improvement of its economic-financial indicators, the Marlim complex was kept fully in the company’s portfolio, with its production already incorporated in its 2022-26 strategic plan.

The plan involves two new FPSOs in Marlim, Anna Nery and Anita Garibaldi, while eight floating units will be retrieved from the area.

BNamericas spoke with top executives at private sector oil companies in Brazil, who attributed the failure to a possible increase in the asset’s value amid the rise in oil and gas prices and to the fact that Petrobras would remain as the leader of the consortium.

“There was no interest in buying half a large field that was going to continue to be operated by Petrobras,” an executive said, asking not to be named.

“The rise in [oil] prices has made Petrobras increase its prices a lot. They are playing too hard, and then the interested parties end up giving up,” said another.

“It’s possible that Petrobras has tried to include new items to compensate for the rise in [oil] prices, and this may have cooled the talks,” a third source commented.

In the case of Ucuru, in the Solimões basin, Petrobras and Eneva terminated negotiations mostly because they could not reach an agreement on the price, which is said to have been pushed to up to 8bn reais (currently US$1.7bn).

The termination of the Urucu divestment came despite the fact Petrobras was selling its entire interest in what is the country’s largest onshore production complex, with output of around 100,000boe/d.

In recent years, Petrobras managed to partially sell, without transferring its operating status, a total of six fields: Berbigão, Oeste de Atapu and Sururu in the Santos basin pre-salt to TotalEnergies; Tartaruga Verde and Espadarte (Módulo III), in Campos to Petronas; and Roncador, also in Campos, to Equinor.

Excluding Marlim, the company is currently selling 100% of 35 offshore fields and three exploration blocks, in addition to stakes in 12 blocks.

Onshore, Petrobras is divesting 100% of 35 fields and 27 exploration blocks.

The project in São Paulo state will be capable of regasifying 14Mm3/d.

Want to read more information about Why Petrobras failed to sell a 50% stake in a major offshore hub?