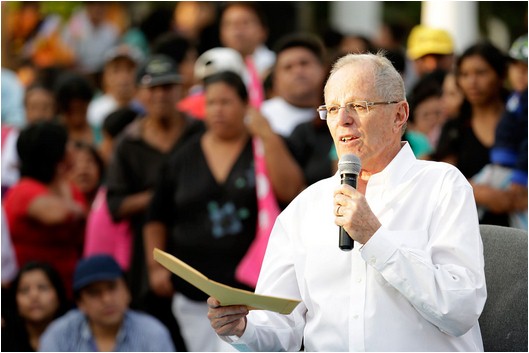 "In our country there does not exist a long-term diversification and sustainable development policy on energy resources. Our principal weakness is not decisively promoting the use of natural gas as a cheaper, and more environmentally friendly, fuel, as well as not taking advantage of the country's hydroelectric resources."

That's according to the government plan of Peruvian center-right party Peruanos Por el Kambio (PPK) whose candidate Pedro-Pablo Kuczynski is a contender in April's presidential election.

The PPK hopeful, a former energy and mines and economy and finance minister, came in third in the country's last general election, held in 2011, after Ollanta Humala and Keiko Fujimori.

- Develop an efficient use scheme for natural gas components by allowing the state to decide how it assigns rights of products, such as ethane, propane and butane, in new blocks with NGLs;

- On the distribution front, approve a new framework to promote public-private partnerships and implement a new corporate governance scheme for state distributors to improve their performance;

- Establish an enhanced mechanism so that, in terms of competition, natural gas and hydropower generation have the same baseline, with each having its own incentive program.

- Ensure that new and old investments are subject to the same regulatory measures or minimize any existing differences.

- Move toward establishing a regulatory framework for the interconnection of the country's grid with those of its neighbors;

- Continue with the promotion of renewable energies and related auctions;

- Execute a more aggressive program to supply electricity to remote areas as well as underserved outer urban and low-income zones.

The document highlights Peru's "sufficient or even excess" installed power generation capacity situation, but that this is a short and medium term, according to the political party.

A PPK government also would continue with prior consultation and establish a national social conflict prevention and peaceful solution system.