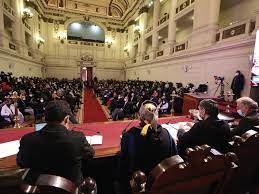 Chile’s proposed new constitution could have impacts on financing and permitting processes for infrastructure projects, according to analysts at ratings agency Moody’s.

There are questions about how certain provisions in the new Magna Carta will affect the financial system in general, while articles in the text aimed at increasing citizen participation could extend the times required for projects to obtain permits.

Although the draft text did not include any measures to intervene in markets or reduce the autonomy of the central bank, there is a lack of clarity on how many of the new social rights will be funded or how the current pension system will be affected.

“[Pension funds] have always been the main long-term funding source for banks,” Felipe Carvallo, VP senior credit officer for Moody’s Financial Institutions Group, said during a webinar held by the agency regarding the possible economic impacts of the new constitution.

While President Gabriel Boric has stated that he will not support any new pension fund withdrawals, Carvallo noted that the previous withdrawals have resulted in reduced liquidity for the domestic financial system.

“There are smaller investment projects that have been funded in the local markets, and if that funding shrinks, interest rates increase and market access becomes more complicated, it could be a challenge for infrastructure sectors,” she said.

Cuan said that these financing issues could also affect concessions, when asked by BNamericas.

She also said that increased citizen participation, as it is outlined in the draft constitution, may have an effect on the sector.

“One of the impacts it could have is higher costs, not only economic, but in terms of time as well. It could give rise to increased bureaucracy in projects and the process for approval of environmental studies,” she said.

Moody’s base scenario for the September 4 referendum is that Chileans will vote in favor of the new constitution, according to William Foster, Moody’s VP senior officer for sovereign risk.

Recent polls have shown that voters who say they will reject the proposal currently outnumber the backers, but they also show large numbers of undecided voters.

Asked by BNamericas about the possibility of voters rejecting the new constitution, Foster admitted that would create a new risk for Chile’s sovereign rating, as it would trigger a fresh wave of political instability.

“It will create more uncertainty, but it won’t stop the people’s wishes. They want more government support,” he said during a press conference held after the webinar.

Grupo CRCC Chile was the only applicant for the construction of the new National Institute of Neurosurgery in Santiago.