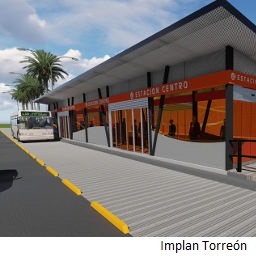 A project to connect the northern Mexican states of Coahuila and Durango will move a step closer this year when Coahuila opens 25.5km of the Metrobús Laguna BRT corridor in Q2, which requires 1.5b pesos (US$61mn).

While Coahuila awarded contracts to begin construction of the hydraulic concrete corridor in 2016, Durango never received the funds to begin its part of the project due to budget cuts during the previous administration of Enrique Peña Nieto.

Now Coahuila’s transport authority has set June 30 as the final deadline to complete its portion of the corridor, which is reportedly more than 90% complete. But the state took over three years to get to that point, raising concerns over how it administered the funds.

Failing to complete the project before July will result in federal economic sanctions for Coahuila, according to an agreement signed by the state, the communications and transport ministry (SCT) and development bank Banobras.

Durango, on the other hand, is persuading the current federal government to revive its part of the bus corridor, according to media reports. But no recent updates on the project have been announced.

The Metrobús Laguna BRT corridor was a project proposed in 2013 by the Peña Nieto government to improve mobility in the Comarca de la Laguna (region of lagoons) area, a metropolitan region shared by the cities of Gómez Palacio (Durango) and Torreón (Coahuila).

SCT’s original proposal involved building a 36km corridor running from Lerdo municipality in Durango to the state line (10.5km) and from there to the cities of Torreón and Matamoros in Coahuila (25.5km). 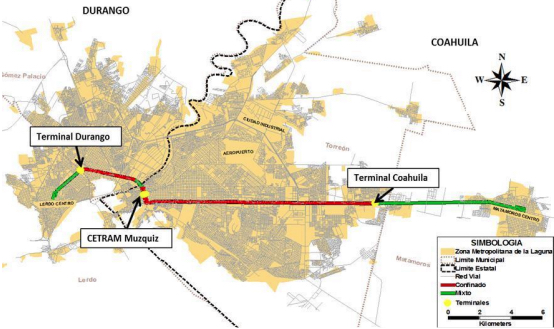 But the project suffered a budget cut in December 2014 and the Durango stretch was scrapped.

Financing for the Durango stretch was projected at 1.6bn pesos, according to Banobras, with 466mn pesos of that coming from national infrastructure fund Fonadin.

After the Durango stretch was discarded, SCT drafted a new plan to construct the 25.5km to Torreón and Matamoros.

Among its benefits, the system will shorten travel time from 45 to 15 minutes between the terminal stations, according to SCT.

Construction of the 25.5km corridor was divided into three stretches.

Cemex Concretos was awarded a 379mn-peso contract for stretch three in 2016, and Alfa Construcciones won two contracts for stretches two and one, worth an estimated 119mn pesos.

Last May, senator Francisco Javier Borrego-Adame of the governing Morena party sent a letter to the upper house to request that construction of Metrobús Laguna be halted and analyzed to determine how funds were handled and whether the project was still viable.

The senator recalled that the project was among Peña Nieto’s never-accomplished promises and claimed there were irregularities in how the state government administered the funds, which it received since 2014.

He said that even though construction was supposed to start in 2016, works had not begun in 2017. In 2018, when Andrés Manuel López Obrador (AMLO) took office, the project was more than 80% complete, he wrote.

In mid-2019, AMLO threatened to cancel the project, but he received negative backlash from local residents who have been waiting for the transportation system for more than five years.

Want to read more information about Project Spotlight: Mexico’s Metrobús Laguna, a reality for Coahuila, a forgotten dream for Durango??