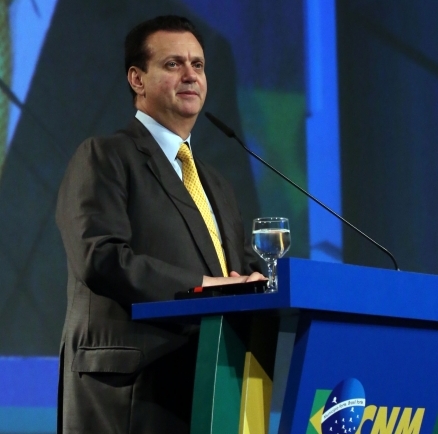 Kassab spoke in an interview with the public broadcasting TV service TV Brasil, his first since taking office on Monday.

In his first remarks as minister, he denied that the debated merger of the ministries of communications (MiniCom) and science, tech and innovation (MCTI) will have a negative impact on either of those areas.

On the contrary, Kassab said many of the topics assessed are intersectoral and can be addressed in an integrated manner. He added that the issues related to communications will continue to be managed accordingly under the new structure, albeit now in secretariats and departments.

While admitting he was still going through much of the details of the ICT agenda and getting to know the pressing subjects of the new ministry, Kassab defended the fortification of telecoms watchdog agency Anatel. Kassab also said it will be necessary to learn to deal with the reality of a smaller budget.

His idea is to make the ministry's structure "lighter", despite having an expanded scope, and that one way to do that is by further empowering Anatel, which could take over many of the tasks which are currently the exclusive responsibility of MiniCom.

The minister also wants to improve the ministry's channels and enhance consumer defense, particularly regarding Anatel, while at the same time giving incentives to the private sector to invest.

"We have to bring security to the investor. There is no country in the world that conducts its development in telecommunications without the participation of private capital. We need to curb excesses; the businessperson needs to understand their limits, but they needs to be encouraged to invest," Kassab declared.

Regarding areas of focus, Kassab pinpointed the internet, which he said it will have "absolute priority" in the ministry's actions. Kassab said he would fight for greater resources to finance internet expansion in the country and said that operators would play a key role in this process.

Before stepping down, former communications minister André Figueiredo launched the new version of the country's broadband policy, Brasil Inteligente. The details on the resources to finance the entire plan remain undecided and Kassab admitted that there could be changes. "I'm unaware of any project of this size that does not go through adjustments throughout its lifetime," he said.

In this regard, Kassab hinted that there could also be reviews of the analog switch-off timetable and the presidential decree that regulated pending aspects of Brazil's internet bill of rights.

But various matters remain open, particularly regarding the operations of the new ministry.

A spokesperson at Anatel told BNamericas that it was "business as usual," regarding the activities and the structure of the agency.

However, it remains unclear whether, for example, MiniCom's and MCTI's portals will remain individually active or if the pages will be deactivated in favor of the website of the new expanded minister. The current MiniCom page has not been updated since May 13, when Kassab was appointed.

A very high-ranking official from the ministry confirmed to BNamericas that, officially, he remains in his post. "Those on are inside are usually the last to know," the source said.

This official also said that Kassab has not yet met MiniCom's managers, except for the ministry's deputy officer, although it has been reported that he has met Anatel's current chief João Rezende.

Furthermore, there are growing voices backing moving responsibilities for TV and radio broadcasting permits from the ministry to Anatel itself. Kassab only briefly touched on this, saying he does not oppose this.

The fact that the Temer government is still an interim one and that President Dilma Rousseff is only suspended from office for trial, rather than being impeached, does not help either. This means not even the new ministry and its chief are definitive yet.

Several of these issues, including his policy for the ministry, should be addressed by Kassab during a hearing at the senate next week.

Financing will cover not only the acquisition of network equipment but also installation, provided Brazilian technologies are involved.

Clearer rules, greater legal certainty and data protection assurances in the bill approved by the lower house of congress are seen as positive for ...

Helexia 'will develop 100MW of additional projects' in Brazil

The headwinds and tailwinds of deploying 5G