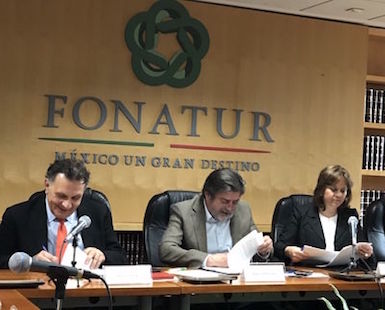 Mexico’s tourism board Fonatur signed an agreement with the UN office for project services (UNOPS) on Tuesday for the Maya train, a 1,525km rail line the federal government is planning to build in the southeastern states of the country.

Based on the deal, the UN agency will provide technical assistance to Fonatur, which is developing the project, regarding the procurement and implementation of the relevant infrastructure.

The agreement will cover nine months of the first phase and entail reviewing, certifying, and validating four tasks: the conceptual design and complementary studies, the business model, the financial pre-structuring, and the tender’s bidding rules.

The collaboration results from a major agreement the foreign affairs ministry (SRE) signed with UNOPS in February to maximize transparency and efficiency in public procurement and infrastructure projects.

When asked by BNamericas at the press conference if UNOPS had overseen the awarding of the four contracts for some pre-investment studies that went to international and local consultancy firms, as well as the launch of a basic engineering design tender, Fonatur director Rogelio Jiménez Pons said the agency “did not participate, but it was directly informed of the decision.”

He added, “our greatest commitment is that more than 90% of the project’s works are put out to tender. Only about 5% of the works had to be awarded directly due to time constraints and practical considerations. From here on, everything will be tendered.”

The official also said the rise from the originally projected 120mn pesos to 900mn pesos (up to US$47.3mn) for the preliminary stage came because the previous government made the initial estimation as the 2019 spending budget was being drafted and did not take into account all the studies needed.

“This is a fantastic project that responds to a transformative outlook to development,” Fabrizio Feliciani, UNOPS regional director for Latin America and the Caribbean said at the event.

Total investment, based on a reference price of 80-100mn pesos per kilometer, adds up to 120-150bn pesos, which is reasonable for a project of that magnitude, Jiménez said.

The train will run on 730km of already existing tracks, which will be completely remodeled, while the remainder will be built from scratch using already secured rights-of-way of existing highways and power lines.

Once the basic engineering and environmental impact assessments on the section for the new tracks are complete, consultations with the local indigenous communities will follow.

Construction is expected to take four years so that the train can begin operating by 2023. Major works will begin early next year, according to Jiménez.

Diesel-powered trains will serve the mostly ground railway, but about 10% of the route could be built as an elevated railway. Based on its main features, the Maya train will be similar to the US$825mn Central railway that is being built in Uruguay, Fonatur officials said.

Construction will be divided into seven contracts, which will be awarded under public-private partnership (PPP) models. The winners of these contracts will have responsibility of completing their designated stretch. Companies will get paid 10% of the contract value initially but will receive the rest in monthly instalments only after they complete their sections.

Other contracts will be tendered for the rolling stock and an operator, but the state will still own the entire project.