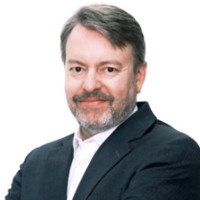 During the pandemic, major banks increased efficiency by expanding their digital footprint and reducing fixed costs.

And although the rise of fintechs is a welcome development, concentration in the sector will remain high for some time.

BNamericas talked with Claudio Gallina (pictured), financial institutions senior director for South America at Fitch Ratings, about these and other developments.

BNamericas: How have Brazilian banks performed during the pandemic?

Gallina: During the early stages of the pandemic, everyone expected a very serious and very strong general impact on the economy. No one could predict how a pandemic could impact companies and the financial system in general.

In Brazil, we had the Lava Jato [anti-corruption] crisis, where we had effects on major companies in some sectors and this generated a domino effect on an entire chain that served these companies. In some way, we expected something similar to happen with the pandemic; however, the impact of the pandemic was weaker.

Our expectation was that the crisis would be much worse than it was. People and companies have managed to adapt to the scenario.

BNamericas: So the scenario now is positive?

Gallina: For the financial system, what we can say is that the scenario was not as bad as we imagined. For small and medium-sized companies and for individuals, the scenario is worse than for large companies.

For the financial system, although it is not as bad a scenario as we predicted, I believe we will see a deterioration in non-performing loans throughout the year, because many debt rollover operations are maturing. But even with this increase in the non-performing loan rate, I do not believe in liquidity problems for Brazilian banks.

Specifically with major Brazilian banks we are seeing that they are managing to recreate their business models, maintaining their credit balance and in some cases even maintaining profitability.

But again, this does not mean that we live in a super good, positive scenario. We expect an increase in defaults.

BNamericas: Poverty indicators deteriorated sharply during the pandemic and the economy fell into a recession last year. Why didn’t these developments impact major banks’ profitability?

Gallina: There is a large universe of the Brazilian population affected by the crisis, but most of that population is made up of non-banking people, so this deterioration was not reflected in the results of banks.

What the pandemic showed us is that the concentration of income in Brazil is still something very remarkable.

On the corporate side, there is the fact that the pandemic has affected small and medium-sized companies more.

Currently, the Brazilian financial system credit portfolio is around 4.2tn reais (US$792bn), of which only 600bn reais relate to smaller companies. Our calculation is that half of that, or about 300bn reais, may have some risk of default, so for banks this is a manageable risk scenario.

For companies, some measures such as emergency credit lines from [development bank] BNDES helped to reduce risks in the sector.

In addition, many companies have managed to get out of the crisis well because they have reinvented themselves digitally.

BNamericas: Will the digital transformation of banks continue at an accelerated pace?

With 80% of the workforce of banks working from home, there is a huge reduction in fixed costs. The pandemic has forced people to use more digital channels and this reinvention will continue.

The branch model tends to get smaller. In addition to having fewer branches we will have smaller branches.

Now, with this there are also more risks of cyberattacks, but the Brazilian payment system model mitigates these risks.

In Brazil, due to the history of inflation, the payment system has been designed in a way in which operations are widely discussed, reducing the risks of systematic scams. In addition, major banks invest a lot in cybersecurity and this ends up benefiting even the smallest banks, because the protection systems, the protective ecosystem, often ends up being shared among the institutions, reducing risks throughout the system.

BNamericas: Could banks reduce provisions this year and how will the increase in the Selic base rate affect them?

Gallina: In 2020, banks made a lot of provisions but for this year I do not expect new ones.

Regarding the interest rate, there was the fact that many banks lent money when the Selic base rate was at a historically low level and now, with an increase in interest rates, there was a risk for a mismatch in the value of loans provided and the cost of funding for banks.

This risk has been eliminated, because banks did not use the Selic rate as reference when they made loans, they used the future interest rate, which already pointed to an increase, so I do not expect a rate mismatch.

In other words, when the Selic was around 2% or 3% per year, banks were lending to clients at 10% per year, so we will not see any mismatch between funding costs and loans provided.

BNamericas: The central bank has been working on regulations to foster competition and reduce the high concentration in the sector. Will these regulations together with the surge of fintechs threaten the dominance of large banks?

Gallina: The pandemic brings an element that affects all sectors of the economy, this major concentration and this happens with banks as well.

Now, about fintechs, there are many companies that are growing, however without growing profitably. The growth has been anchored by the money injected by investors, but with many companies making no profit that is a problem as in the long run it is the profit that guarantees the perpetuity of the business.

There is a doubt about the capacity of some fintechs to continue to resist operating without making a profit.

In addition, we must also remember that a fintech that grows too much also will face more regulatory requirements from the central bank.

Fintechs are more than welcome, they provide oxygen to the sector, but I do not see in the short term such a big change in the profile of the Brazilian banking industry.

BNamericas: What scenario do you see for South American banks?

Gallina: Most countries in South America are in line with the reality we discussed about Brazil, which is a pandemic context perhaps not as negative as predicted.

Many people ask about the impact of new waves of the pandemic, but what I see is that people and companies have better understood the effects of the pandemic in their business models and are are better prepared to resist shocks.

Although Brazil's development bank might increase project financing, it will not do so at the expense of the capital market, BNamericas was told