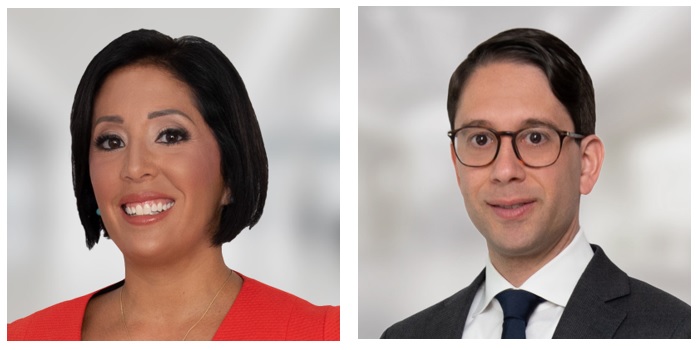 Globally, as governments and the private sector sharpen their focus on clean hydrogen and its derivate products such as ammonia, law firm Clifford Chance has established a dedicated clean hydrogen taskforce.

The company is active on the hydrogen front in Latin America, a natural resource-blessed region that is seen as holding a wealth of potential in this area.

To find out more about the taskforce and look at what's happening in Latin America, BNamericas spoke with two of the firm’s US-based lawyers: partner Jessica Springsteen and counsel Alberto Haito.

Clean hydrogen is generally considered hydrogen produced in a process that generates zero, or low levels of, carbon emissions, such as green or blue hydrogen.

BNamericas: What are the goals of Clifford Chance's Clean Hydrogen Taskforce?

Springsteen: Clean hydrogen has the potential to change the way we generate, store, transport and consume energy and it's the biggest and hottest topic among energy policymakers and governments around the world.

Our Clean Hydrogen Taskforce was primarily created to internally invest in ourselves by promoting our knowledge and expertise about the clean hydrogen value chain on the commercial, regulatory and legal levels, and externally to promote our profile to actors in the space.

So many of our clients are involved in clean hydrogen and looking to decarbonize, and we provide a unique ability to look at it with a global scope.

Haito: Our Clean Hydrogen Taskforce is part of a wider Clifford Chance global effort called the Seven Pillars of Energy Transition, comprised of seven pillars that have been identified by the firm to help our clients address the climate crisis and meet Paris Agreement targets. We recognize that hydrogen is one of the keys to the energy transition.

BNamericas: How will the first generation of projects be financed (debt, equity, project finance)?

Springsteen: I would say it will be equity primarily and then multilateral money, if there is any debt. Given the start-up costs of clean hydrogen projects at the moment, they will be financed on balance sheet by those developers or sponsors that are looking to finance or start pilot projects, but eventually it won't be a project finance type structure.

For example, there is this German institution H2Global Foundation, created and funded by the German government, that will function effectively as an offtaker. They'll have an auction and go anywhere in the world that's producing green energy and purchase it. Those types of government-to-government mechanics or systems will be how these very early on pilot projects get financed. Clean hydrogen is still relatively nascent, so that's what we're seeing right now in terms of the financing.

Haito: Let's also keep in mind that certain governments are trying to encourage the development of these projects. Chile, for example, has a subsidy towards clean hydrogen projects.

Springsteen: Exactly, this will have to start at the government level. The problem is that there isn't enough money in governments, so it will have to be both the private sector and the public sector working together to create incentives for investors to come and take on these projects.

BNamericas: What types of financial institutions could potentially get involved?

Springsteen: Multilaterals such as International Finance Corporation, Inter-American Development Bank and other DFIs will be involved at the beginning. But we also expect to see technical assistance or structuring assistance from other institutions beyond just financing.

Many commercial institutions, institutional investors and investment banks have created ESG councils and have heads that are responsible for energy pillars similar to what Clifford Chance has, one being green hydrogen or clean hydrogen. So they're looking into market opportunities, but can also provide added value to countries looking to invest in clean hydrogen. They won't be the ones leading, but they can give technical assistance.

BNamericas: What activity on the green hydrogen front are you witnessing in Latin America?

Springsteen: A lot of activity. Latin America is one of the leading regions in the use of renewable energy, and it's going to play a major role in the international push for production of clean hydrogen on a broader scale. International players are very interested in Latin America and they've been following the development of the hydrogen market.

To put it into numbers, 11 countries have published or are preparing national hydrogen strategies or roadmaps – Chile, Argentina, Bolivia, Brazil, Colombia, Costa Rica, El Salvador, Panama, Paraguay, Trinidad and Tobago and Uruguay. Many of these countries have been assisted by multilateral institutions in the development of those plans.

In terms of projects, (and this changes because it's a rapidly moving target) we've identified at least 500 projects across the different countries in Latin America from small-scale transportation projects to mass-scale projects such as the Magallanes and Pecém hubs, which will require billions of dollars to be fully implemented over several years. In Colombia there was a collaboration between Colombian oil company Ecopetrol and one of the French sponsors. And there are several pilot projects that are taking place already.

Haito: And not only clean hydrogen, but also what we call the derivatives of clean hydrogen. There's a lot of talk about development projects around green ammonia in Colombia, for instance. The beauty of green ammonia is that it's easier to store and transport, which makes it an ideal chemical store for renewable energy. We also need to consider that some of these countries in Latin America have the best solar and wind resources in the world, as well as massive hydro resources.

So it's just natural that countries with these types of renewable energy resources available to them start developing and becoming world leaders on clean hydrogen and its derivatives.

BNamericas: What trends are you seeing that will enable the clean hydrogen industry to really start to take off globally?

Springsteen: As we know, the general global trend is a shift away from major utilities and tech giants towards more clean energy and hydrogen. There's national and supernational focus on clean hydrogen as a solution to the energy transition in pursuit of the Paris Agreement, but to get to the energy transition goals, carbon capture projects will have to be developed alongside clean hydrogen projects.

We also need new technology to increase renewable capacity and competitive auction processes, which will drive down the price of renewable energy. The issue is that there's a lot of renewable energy and potential, but then there's outdated or no infrastructure to carry whatever energy is produced from point A to point B, and this is a problem across Latin America. We need to drive down the price of clean hydrogen and it's hard to do that while scaling up.

There also needs to be regulatory clarity in every single country and then globally. For example, many European countries want to purchase clean hydrogen, but there isn't one definition across the world that says this is what clean hydrogen or green hydrogen means in practice. So we need a uniform understanding of what we're talking about.

Haito: There are definitely still some issues that clean hydrogen needs to tackle to really take off. For example, you need fresh water for the electrolysis process and some places have zero access to fresh water. So how do you deal with that? But clean hydrogen is hopefully going to be similar to wind and solar energy where, when we started, prices were incredibly high. Then, once projects were scaled up and technology improved, costs started to descend rapidly.

Spotlight: The wind farms currently under construction in Mexico