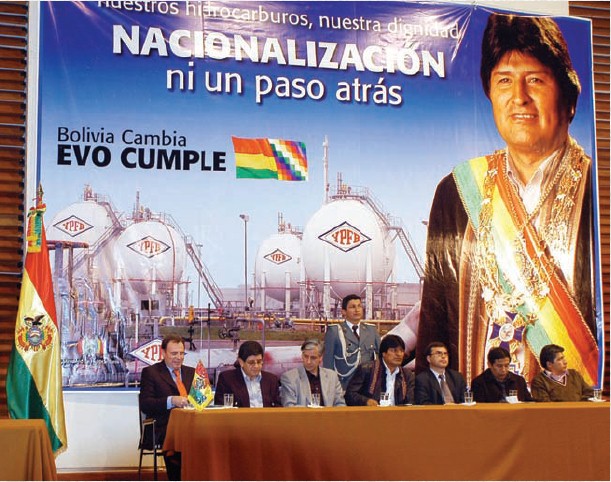 Bolivia's President Evo Morales nationalized the country's hydrocarbons on May 1, 2006.

In this first of two Q&As looking at the nationalization process, BNamericas talked to energy consultant Mauricio Medinaceli, who was Bolivia's last hydrocarbons minister before Morales took over in January 2006.

BNamericas: What impact did the nationalization of Bolivia's hydrocarbons sector have on the country?

Medinaceli: From the political and media perspective, the impact has been deep, because the international community thinks that effectively in Bolivia the hydrocarbons industry was nationalized.

That makes them see a change of paradigm in the management of the country's natural resources. However, the truth is the nationalization signified lower additional revenue for the state oil company [YPFB] because in reality the economic boom Bolivia lived in the last 10 years is due to three factors.

The third variable is the direct hydrocarbons tax – IDH – which was a tax created in 2005 a year before the nationalization. Thanks to this tax and other mechanisms, all or a large part of the economic gain of the oil and gas sector in Bolivia was used for public investment in Bolivia's economy.

These three factors explain why the hydrocarbons sector in Bolivia is behind half the economic growth of the country during the last 10 years.

BNamericas: The government highlights that thanks to nationalization there was an important increase in investment and oil revenue. Can one refute these numbers?

Medinaceli: Certainly, because the size of the hydrocarbons pie in Bolivia grows because of two factors: the Brazil exports and higher gas export prices due to international oil prices. That made the pie grow in the last few years.

Why does the Bolivian state have a greater participation of this pie? Because of the direct hydrocarbons tax created a year before nationalization. For example, if the pie is 100%, we can say that 18% is royalties and 32% is the tax, so it totals 50% and the nationalization added something like an additional 10%.

BNamericas: After YPFB took possession, it seems the few companies that stayed are still the same ones; no new companies have arrived.

Medinaceli: I'll give you an example. In 2006 Bolivia exported a little more than 80% of the natural gas produced in the country. Today it exports a little more than 75% to Brazil and Argentina. Therefore, in terms of hydrocarbon contracts, there was no change to a new market, to a petrochemical project, to new conditions. That is to say, that for the state to say it took control of the hydrocarbons does not change the nature of the destination of natural gas in terms of international markets. If you like, there hasn't been a qualitative, not even quantitative, change in the destination of those resources.

The nationalization has not been an orthodox nationalization in the sense of companies being expelled and capital expropriated. What occurred in Bolivia was a renegotiation of contracts with the operators that were in the country up to 2006 and that continue until now. In this renegotiation of contracts the additional percentage is added that I mentioned earlier, of 10% more or less, for YPFB. On paper it appears that YPFB is the great aggregator of all production in Bolivia, but which in reality doesn't translate into new markets or new prices.

BNamericas: Bolivia's export-oriented, natural gas industrialization hydrocarbons policy envisions turning the country into the energy "heart" of South America. Is this the right road, an attainable goal, and what are the challenges?

Medinaceli: Until now, there hasn't been a genuine industrialization of hydrocarbon resources. No, and in that I'm emphatic, because three quarters of gas production is still exported as a raw material to Brazil and Argentina, which is contrary to the export of greater added value.

To the extent that the country has a greater quantity of reserves, it can venture into industrialization projects and other types of destinations, as well as the export of natural gas as a raw material.

The central problem is that the nationalization reaped the harvest of what the country did in the last 25 to 30 years. That is to say, there was no planting of orange trees, what was done was to harvest the oranges and sell them at the highest price possible.

One of the greatest problems of the nationalization, despite its media impact, is that it hasn't signified an increase in natural gas reserves. Right now, the country certainly has difficulties to convince buyers it has sufficient reserves of natural gas.

BNamericas: Bolivia's 2016-20 economic and social development plan envisions US$12.7bn for hydrocarbons and looks to increase natural gas reserves to 17.5Bf3 and liquids to 411Mb. How ambitious is this?

Production in Bolivia, for years, was in the order of 0.8-0.9Bf3. To put it in simple terms, every year Bolivia consumes 1 for every 10 it has in reserves, it's that simple. During the last 10 years there hasn't been a push for investment in exploration to increase those reserves and in fact, if we review the news in the country, a few weeks ago the state oil company declared it didn't find oil in one of the regions of Bolivia despite investment of US$150mn.

Any efficient and rational private company, at the moment of exploring, follows a series of steps. It starts with seismic, later a well, two wells, etc. In this case all the exploration procedures were conducted until the end, as if oil was really going to be found and all the signals were positive, and later they announced a failed discovery.

BNamericas: After the result of this year's referendum where President Evo Morales lost the possibility to run for a fourth term in 2020, what can we expect on the hydrocarbons policy front during the remaining years of his administration?

Medinaceli: In terms of hydrocarbons policy I don't expect many changes. We can start with what should happen in the sector.

The sector should remove subsidies for gasoline, diesel and natural gas in the internal market, taking advantage of the current low international price environment. It's the ideal moment to remove subsidies. A progressive tax policy should be implemented to promote investment and attract private capital, above all foreign, to explore in the country.

None of these actions, which from my point of view should be carried out, will be promoted by the current government, which tells us that a statist, media-centric policy will continue to be shown to the international community, maintaining production in the country with the operators that are currently here.

Regional EPC firm Y&V, which operates across various industries, outlines areas of potential business and its renewed focus on the water sector.

After the resumption of operations, Bolivia's ammonia and urea plant already operates at 76% of its productive capa...

After resuming operations, the PAU already operates at 76% of its productive capacity

Bolivia reactivates PAU operations and foresees production of 590,000 tons of urea in one year

The Bolivian Company for the Industrialization of Hydrocarbons signs a Memorandum of Understanding with the Governm...

Bolivia reactivates the production, application and good technical use of fertilizers in crops

Reactivation of the Bolivian Ammonia and Urea Plant is 85% complete

Five countries in the region intend to purchase 1.4 million tons of Bolivian urea