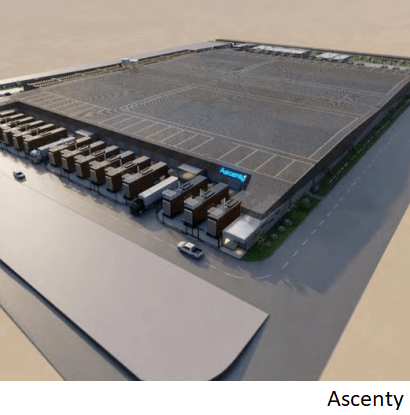 Initially planned for 2021, the construction of Santiago 2 faced delays related to the pandemic, as the number of on-site workers had to be decreased for health issues, the executive added.

Another pandemic impact came from logistics and the lack or delay of materials and components by suppliers.

The Santiago 2 facility is located in the Quilicura district of the capital, covering an area of 21,000m2, with 31MW in total projected capacity. It also has the capacity to store 3,550 racks.

The facility relies on its own redundant Tri-bus substation, with three power lines supplying each module, and a diesel generation system with an autonomy of 48 hours without refueling.

The datacenters will also be interconnected through 35km of proprietary fiber optic network, Siqueira said.

Overall, Ascenty’s 2-datacenter campus in Chile will have a total power capacity of 42MW and a total area of 27,000m².

The group activated this month its first two datacenters in Mexico, with combined investment in both buildings amounting to 1bn reais (US$185mn).

Together, the datacenters have a total power capacity of 52MW, 44,000m2 of total area and capacity for 6,100 racks. Both are linked by a new-built fiber network of 150km, connected to the main internet network exchange points in Querétaro.

According to Siqueira, the sites went live with leasing contracts signed with eight clients, including a global cloud provider, as well as tech companies, with potential contract closing with telecom operators.

The company also has a third land acquired for the potential construction of a third datacenter in Mexico, the executive said.

“What has led us to open and build new datacenters in several countries in the Americas is closely associated with a huge demand from large cloud providers and technology in general,” said Siqueira, who did not reveal the names of clients.

Ascenty now has 21 sites in operation and seven more in construction in Brazil, Chile and Mexico. Chile’s second facility still counts as “in construction”. The company also has advanced plans for Colombia, which is expected to be its next Latin American market, and Peru.

According to Siqueira, several more datacenter projects are expected for 2023 in Latin America.

Around 92% of the actual capacity of Ascenty's existing datacenters are already sold, he said, which means 120MW in IT capacity in use.

Ascenty is expected to end 2022 with investments of 1.3-1.4bn reais in the construction and expansion of datacenters in Latin America, 80% of which are allotted to Brazil, according to the executive.

In 2023, Ascenty is targeting 1.5bn reais in investments, among existing and new projects.

The difference in values from 2021, 2022 and 2023 is not related to investment cuts, according to Siqueira, but rather to the large delivery cycles the projects have as a result of the fallout from the pandemic.

Legislators presented a bill that would force concessionaries to compensate users if they are victims of a crime while driving on highways under co...

The Spanish group will build section 4 of the subway's future Line N°7.