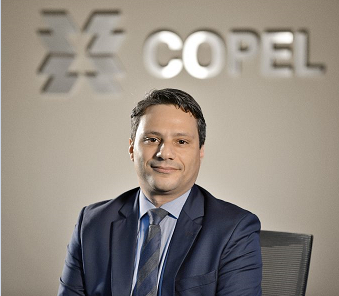 Brazilian utility Copel is just about to finish the studies for the planned sale of its 82% stake in the 482MW Araucária thermal plant (UEGA), according to a company executive.

The plant is located in Paraná state, which owns Copel.

“[National oil company] Petrobras is divesting its 18% interest in UEGA. So this will allow players that dominate the gas chain to acquire up to 100% of the asset,” Copel’s new business director, Cássio Santana da Silva (in photo), told an investor presentation on Tuesday.

The executive (pictured) highlighted the fact that the plant’s contract ends in 2029, with the possibility of being renewed.

Meanwhile, Copel is preparing an auction on São Paulo stock exchange B3 to sell its 51% stake in gas distribution firm Compagás.

“We expect to hold the auction between 180 and 210 days after the renewal of its concession, whose negotiations are in an advanced stage,” Silva said.

Another planned divestment is the Foz do Areia hydroelectric plant, whose concession Copel plans to renew for another 30 years before the sale.

The company has hired Banco Santander as financial advisor with the aim of preparing an auction for the divestment.

While divesting some of its assets, Copel is planning to go shopping for new ones.

To reduce execution risk, the targets will be early-stage projects that offer synergies for Copel’s businesses: power purchase agreements in the free (non-regulated) market and self-produced energy.

By 2030, the company plans to add at least 2GW of installed capacity to its portfolio – mostly wind and PV solar assets – in order to reach 9GW and become a 100% renewable energy group.

The company also plans to expand its power distribution business beyond Paraná state and invest in distributed generation (DG).

“DG is a defensive strategy. The transition of small customers to the free market will be through this model,” said Slaviero.

Regarding the potential privatization of Copel, the executive only said that the final decision rests with the company's board and the state authorities.

There are also no problems with supplies at fuel resale stations following Sunday's turmoil, according to the regulator.

Over 30 firms are categorized as small or medium-sized, making them eligible for a number of benefits.