Chile growth trends up as specters of violence, coronavirus hover 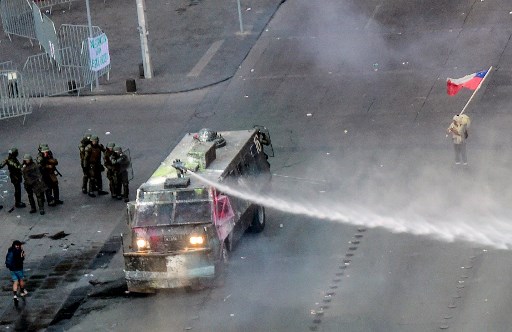 Chile’s economy grew faster than expected in January after surprising to the upside in December.

The consensus forecast was 1.2%.

The economy contracted in October and November amid social unrest and widespread violence. In December, growth reached 1.1%, beating the negative or zero growth reading the market was expecting.

Local free market think-tank Libertad y Desarrollo (LyD) cited the impact of lower levels of violence seen in January, but warned of the risk of future flare-ups and fallout from coronavirus, also known as Covid-19.

Social tensions eased in January and February, the country’s summer vacation period, but Incidents of unrest – such as barricades in some neighborhoods of capital Santiago – were registered on Sunday and Monday as people return to their jobs and schools and the focus tightens on April’s constitutional plebiscite.

In terms of coronavirus, Chile has not reported any cases of the virus yet, but officials are bracing for a potential outbreak. A small, open economy, Chile is among the nations in Latin America most exposed to a slowdown in economic activity in China, where the first cases were reported.

Economic activity benefited from a reduction in violence in the first month of the year, LyD economist Felipe Berger wrote.

“For a favorable scenario in terms of economic recovery, it is vital to avoid a resurgence of violence and vandalism in March and beyond. Added to the above, our export sector is forecast to weaken as a consequence of Covid-19”.

The research unit of asset manager Inversiones Security, part of local financial services group Grupo Security, estimated that activity accelerated in February, but warned of coronavirus fallout and the impact of heightened uncertainty.

“In short, the January [GDP proxy] Imacec reading surprised to the upside and the outlook we have for February (2.5-3.0%) is greatly influenced by the fact there was one more day on account of it being a leap year,” Inversiones Security said.

It forecast that coronavirus, compounded by domestic uncertainty, will constrain activity readings over the coming quarters.  The research unit of Santander Chile is also expecting February growth to register at 2.5-3.0%.

GDP growth for 2020 is estimated to come in at around 1.0%, with a drop in private investment, forecast by some, seen as a contributing factor. Much hinges on uncertainty levels and how the coronavirus situation plays out.

British research firm Capital Economics said in a note that "a key point to keep in mind is that it’s the measures to contain the virus – rather than the virus itself – that create much of the economic damage."

ALSO READ: What S&P sovereign analysts are focusing on in Chile

Want to read more information about Chile growth trends up as specters of violence, coronavirus hover?