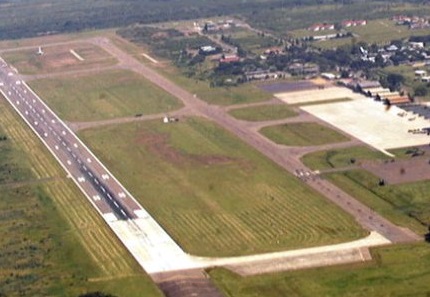 The news comes as Coalianza and government authorities are deciding on the future of capital Tegucigalpa's existing international airport, Toncontín.

Palmerola is a former US military airbase (pictured) near the city of Comayagua and work involves overhauling it and building civilian airport infrastructure such as a terminal and cargo facilities. The contract was awarded in December to a consortium comprising Honduran company EMCO and Germany's state-owned Munich airport operator Flughafen München GmbH (FMG). Construction was expected to begin next month and wrap up in about two years.

Toncontín is operated by Aeropuertos de Honduras (Interairports), which is controlled by Honduran conglomerate Grupo Terra, who holds the concession through 2020.

Honduras' government would have to compensate Interairports for the early termination of the concession at Toncontín, while, on the other hand, a clause in the Palmerola concession stipulates that the government is required to compensate EMCO some US$800,000 a month if Toncontín's domestic and international flight-handling operations are not halted within 90 days after Palmerola becomes operational, the daily reported.

The country's finance minister, Wilfredo Cerrato, has, however, indicated that the government wants to keep Toncontín open for domestic flights, which raises questions about why Coalianza and Honduras signed a contract with a clause that the government is apparently unprepared to honor.

Coalianza director Miguel Ángel Gámez has already indicated that the construction schedule for Palmerola is to be amended, given that EMCO and FMG are required to secure financial close in a set period of time, which will now be extended given the ongoing negotiations.

Coalianza is looking at measures to keep Toncontín open, which would have to be provided through an addendum to the Palmerola concession contract, although opposition lawmakers are expected to push for a new contract for Palmerola, the daily said.

The government, or though a third party, is also responsible for the provision of a transportation service to Palmerola, which is around 80km by highway from downtown Tegucigalpa.

Required investment in a first phase is estimated at US$140mn and the concession period is 30 years.

The 165km highway from Comayagüela in the capital district to Talanquera in Olancho is in poor condition and considered dangerous for motorists, le...

Both hospitals, one in Tegucigalpa and one in San Pedro Sula, will be specialized in traumatology.

Honduras to invest nearly US$50mn in school infrastructure next year

Honduras’ debts to construction sector seen being paid off this year

Other companies in: Infrastructure (Honduras)