Increasing natural gas use in 7 Peruvian regions: a mature and profitable project 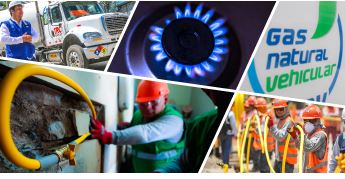 In recent decades, the Peruvian State has promoted a decisive policy of widespread use of natural gas for industrial, vehicular and residential users. As a result of this policy, natural gas (natural gas and natural gas liquids) accounts for 63% of primary energy production in the country, according to data from the Ministry of Energy and Mines of Peru as of the end of 2018.

The process of widespread use of natural gas in Peru began in 2004, with the construction of the Natural Gas Liquids (NGL) and Natural Gas pipelines. The pipeline that transports Natural Gas is approximately 729km in length, beginning in the Amazon basin, in the district of Echarate, La Convencion province (Cusco region), crossing the Andes mountain range and reaching the Pacific Ocean at the delivery point, located in Lurín (Lima).

Construction of this mega-project and the legislative changes that the Peruvian State has made, have facilitated the widespread use of this important energy resource, both in Lima and Callao, and in the coastal areas of the north and south of the country, generating significant savings for the national economy.

The scheme that Peru has been employing to encourage the widespread use of natural gas, in most cases, is through Public-Private Partnerships (PPPs), as this mechanism ensures quality service during the term of the concession. It should be noted that, according to the regulations, PPPs are a form of private investment through long-term contracts, in which the State (through a public entity) and one or more private investors participate. In Peru, through PPPs, public service projects, among others, are developed and, in accordance with the provisions of national regulations, the distribution of natural gas is a public service.

Under this modality, the concessions in Peru for the use of natural gas are in effect in Lima and Callao; Ica; and the north zone (Áncash, La Libertad, Cajamarca and Lambayeque).

Precisely to attract new players, the Peruvian State, through the Agency for the Promotion of Private Investment of Peru (PROINVERSIÓN), has relaunched the call for an international public tender for this important project. The deadline for submitting a bidder qualification request is February 3, 2021 and the deadline to send suggestions or comments on the consolidated version of the contract is December 18, 2020.

This project will be executed under the PPP modality, consisting of the design, financing, construction, operation and maintenance of natural gas distribution systems through a pipeline network.

The Widespread Use of Natural Gas in Seven Regions project, declared a public necessity by the Peruvian State, is part of the National Infrastructure Plan for Competitiveness, and aims to bring natural gas to seven (7) regions with a population of 5.6 million. Through this infrastructure, it is expected to serve more than 300,000 residential customers during the concession term (32 years). During the first stage, to be executed in the first eight (8) years of operations, the goal established in the Minimum Connections Plan is to provide service to 113,535 users. The project focuses on residential consumers and it is expected that upon completion of the Minimum Connections Plan there will be important infrastructure in place, not only to provide residential service but also commercial, vehicular and industrial.

The estimated investment (CAPEX) for the project, in the first stage, is US$200 million (without VAT). It should be noted that this amount does not include the cost of residential connections.

Due to the widespread use of natural gas being of national interest and considering projected demand, it has been decided that to achieve a balance in the rates to be charged, resources from the Social Energy Inclusion Fund (FISE) and the Hydrocarbons Energy Security System (SISE) will be used in the project. The FISE fund was created by the Peruvian State as a social inclusion policy mechanism aimed at expanding the energy frontier in vulnerable segments of the population, and the SISE fund is made up of a charge on bills, determined by the regulatory entity (OSINERGMIN), to ensure the development of hydrocarbons energy security.

The SISE applies since the project was included as part of the hydrocarbons energy security system. Likewise, it supports the Complementary Income Mechanism (MIC) stipulated in the concession contract.

Regarding the MIC, it should be specified that as income of the concessionaire this will not be subject to the payment of IGV (VAT) nor the payment of income tax, unlike the revenues from rates.

In this way, the income risks observed in previous concessions are mitigated, allowing for adequate financial profitability. The successful bidder will be the one that requests a lower amount per connected consumer and, therefore, a lower MIC.

For its part, the FISE fund will finance, for each Connected Consumer under the Minimum Connections Plan (that meets the criteria for determining the beneficiaries of the FISE), the right of connection and the comprehensive internal installation service; the values of the right of connection and the connection itself are regulated in the contract. The use of the FISE will encourage low-income households to connect to the natural gas network. Therefore, currently the population of the seven regions is eager to have natural gas service, because according to PROINVERSIÓN estimates, the energy rates for home users would be reduced by at least 20% compared to the alternative fuel (Liquefied Petroleum Gas, LPG).

Precisely due to the high social profitability of this project, the authorities of the seven regions have shown their interest and support for any administrative measure required by the concessionaire.

The project is certainly part of the challenge of the State to provide cheap and clean energy to the Andean highlands. In this sense, the investor will provide, within the framework of the concession contract that is signed, the natural gas distribution service for a variety of users, for which it must implement the essential infrastructure that ensures the provision of the service in each of the cities located in the seven regions.

The minimum infrastructure to be implemented, as part of the concession, in each city comprises equipment for the ‘virtual’ transportation of natural gas (either by the concessionaire or contracted to third parties); decompression or regasification plant infrastructure; district stations and pressure regulation; steel networks to the city gates; polyethylene networks; connection and internal installations; and complementary investments in land and minor equipment.

Depending on the structure of the project, the investor will be able to rely on supplies of Natural Gas through technologies such as Compressed Natural Gas (CNG), Liquefied Natural Gas (LNG) and/or directly through pipeline infrastructure connected to a specific transport or production system. The natural gas supply sources are expected to be Block 88 of the Camisea field in Cusco (operated by Pluspetrol) for the highland regions (Apurímac, Ayacucho, Cusco, Huancavelica, Junín and Puno) and Block 31-C (operated by Aguaytía Energy) for the department of Ucayali.

OBLIGATIONS OF THE CONCESSIONAIRE

As the scope of the project is the seven regions, the concessionaire will define in which region construction of the infrastructure will begin, in accordance with the technical and economic conditions, and in compliance with the obligation to comply with the Annual Minimum Connections Plan.

As already mentioned, in the first eight (8) years of operations, the concessionaire must reach 113,535 connected users, then it will have to prepare five-year expansion plans approved by the Peruvian State regulatory body (OSINERGMIN), which are aimed at securing the greatest number of connections in each region considered in the scope of the concession.

It is projected that commercial start-up must occur, at the latest, within a period of thirty (30) months from the signing of the contract or a period of thirty-six (36) months in the case that the concessionaire requires a detailed and/or semi-detailed Environmental Impact Study.

But as the benefitting population expects this initiative to be completed soon, the project design allows the concessionaire to start earlier than the above in the regions that are in a better situation for the service to be launched. The early start scheme must be defined by the concessionaire within a maximum period of ninety (90) calendar days from the signing of the contract. In that sense, the structure and goals of the project become predictable and interesting.

The expectation of the Peruvian State is that the Siete Regiones project will be operational by the end of 2023, an objective to which both the entities of the National Government and the entities of the regional and local governments of each of the seven regions are committed.

DEADLINE FOR REQUEST FOR QUALIFICATION

According to the tender schedule for the Widespread Use of Natural Gas in Seven Regions of Peru project, the tender rules can be consulted until January 14, 2021, and the deadline for the request for qualification is February 3, 2021. It is foreseen that the receipt of economic proposals and the approval to award the project will be on March 19, 2021.

The payment period for the right to participate is currently open. Those interested in registering as participants can do so by paying the corresponding Participation Right for the sum of Two Thousand United States dollars (US$2,000.00), an amount that includes VAT.

According to the Tender Rules, to be qualified as a bidder it must be demonstrated, individually or through related companies, that the requesting party directly operates distribution systems via pipeline networks to a number of connected consumers that is not less than one hundred thousand (100,000) .

Likewise, the potential participant or consortium to which it belongs, or related companies, whose figures or experience are suitable to qualify, must prove, individually or jointly, in the last two (2) completed fiscal years: Minimum Net Worth of One Hundred and Twenty-Nine Million Dollars (US$129,000,000.00); and Total Assets of Three Hundred and Ninety One Million Dollars (US$391,000,000.00).

PetroTal resumed operations in the Bretaña North Field of Block 95, after reaching agreements

A technical work group will be formed to analyze the situation of the towns in the area of direct influence of the Bretaña North field.

PCM and MINEM reach an agreement to lift a measure of force by indigenous communities in the area of influence of L...

Gasnorp: 5,000 homes now have natural gas in the Piura region

Peru to receive definitive plan for US$3bn highway in June

The ICT challenges Colombia's next president will face

Want to read more information about Increasing natural gas use in 7 Peruvian regions: a mature and profitable project?