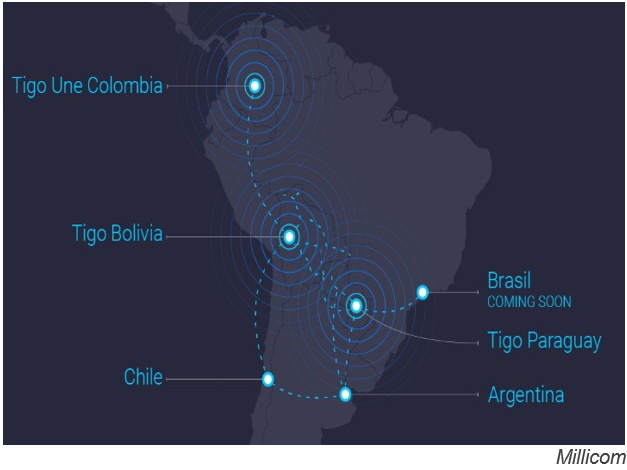 “We will complete [this year] our fiber connectivity project from Bolivia to Paraguay. As a result, ours will be the only fiber connection between the two oceans through existing terrestrial routes,” CEO Mauricio Ramos told investors in a quarterly call.

The project consists of a B2B fiber optics cable that interconnects Colombia, Bolivia, and Paraguay with Argentina, Chile, and Brazil, the latter three markets where the company does not yet operate in retail.

"The launch of this South American or SAM ring becomes part of Tigo Business’ MPLS network (multi-protocol label switching) and interconnects with our Central American ring (CAM). We have a network that, for the first time, creates a corridor extending from Mexico to Argentina," according to the company website.

Ramos also said that Millicom will finalize its Tigo Cloud project this year, which involves the interconnection of 13 Tier 3 datacenter facilities across all countries where it operates with its own cloud solutions.

“With this, we can host in-house or IT Tigo Business on telco needs, all in our own cloud infrastructure. This project has been in the making for the last four years and will allow us to cost efficiently add capacity to absorb the traffic growth that we continue to see on our network,” he said.

According to Ramos, Millicom is doubling the capacity of its datacenters in Bolivia due to Tigo Business growth.

Millicom is on track to crystallize value for its infrastructure and fintech arms and reducing net debt.

“The key message is that we are on-track to meet our OCF [organic cash flow] growth target of approximately 10% for this year to generate solid equity free-cash flow in 2022, in-line with our budget for the year, to invest about US$1bn,” Ramos said.

In February, Millicom committed to invest US$1bn per year in Latin America for the next three years.

Millicom’s cash capex, which represents “the cash spent in relation to capital expenditure, excluding spectrum and licenses costs,” was US$777mn from January to September.

“The macro-environment is indeed much tougher, and yet we remain not totally, but very broadly on-track,” Ramos said.

He added that the company is well-prepared to face that period after, among other things, the completion of network modernization and a rising customer base with sustained or larger market shares.

Mobile network modernization is underway in Paraguay and Colombia with 5G compatible radios. He also said that 4G, with reinforced radio, will reach 79% of its covered population by end-year.

ALSO READ: How and where Millicom is investing in LatAm

In its financial report, the company said the consolidation in Guatemala was the most important factor affecting most lines of Q3 financial data, when compared to the third quarter last year.

According to the company, the consolidation more than offset the impact of a weaker Colombian peso, which depreciated 9.2% during the quarter and was 12.1% weaker year-on-year.

Guatemala’s service revenue, in turn, declined 0.5%, “as we took additional steps to defend our market leadership,” while Bolivia’s declined 0.6%, impacted by a change in prepaid top up regulation that took effect in August.

By September, Millicom had over 40mn mobile customers, up 160,000. The company gained customers in almost every country, except Guatemala and Bolivia, where prepaid clients declined.

About 200,000 customers were reclassified from postpaid to prepaid upon completion of a large government contract in Colombia, Millicom said.

The company claims to have added over 500 points-of-presence (antennas or sites) to its 4G network, ending the period with 17,000, an increase of 15% year-on-year.

Most of this fixed base refers to copper and hybrid fiber coaxial cables (HFC), but Ramos said that in Q3 the company started to accelerate greenfield fiber deployments.

Ramos expects a strong ramp up of HFC and fiber deployments in the rest of the year.

“By year-end we will have rolled-out about 850,000 new homes passed, either with HFC or FTTH, including Honduras. And as a result our network will pass about 30.3mn homes by the end-of-the year. And of these, around 800,000 will already be fiber-to-the-home, with fiber deployments now active in all our countries.”

According to Ramos, as quarantines ended and people went back to offices and schools, spending on pay-TV and residential services slowed down. “And this is a phenomenon that is happening just as the global economy is slowing and consumers are feeling the effects of higher inflation,” he said.

Finally, Millicom is expected to present details of its Project Everest in Q4. It relates to a multi-year financial and operational efficiency plan which has been in the making since early this year.

CFO Sheldon Bruha said in the call that Everest will be a key pillar of Ebitda and OCF growth from next year.

The telecom tower group deployed 14 new sites in December, ending 2022 with 172 new towers across three markets in the region.

The new data center will become the first of its kind in Southern California and will provide redundant access to the company's fiber-crossing solu...

Argentina Works to Lessen Toll of Cyberattacks with IDB Support