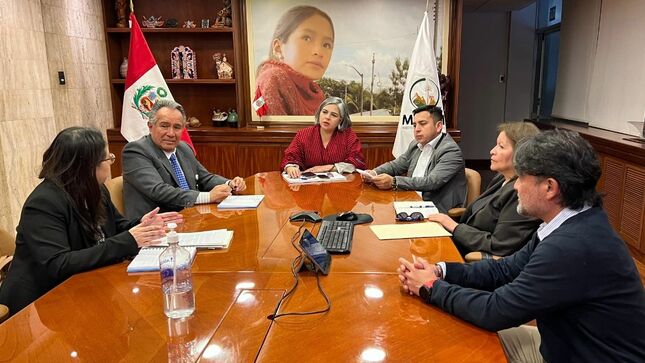 The Minister of Energy and Mines, Alessandra G. Herrera Jara, met tonight with officials from the state-owned companies Petroperú and Perupetro, with the aim of evaluating actions within the framework of strengthening the Hydrocarbons subsector and promoting investments in oil and gas. natural.

At the meeting, which was held at the MINEM headquarters, issues were addressed such as the future signing of the contract between Petroperú and Perupetro to carry out operations in Lot 192 (Loreto), which will make it possible for the state company to return to activities of production of crude oil, strengthening its presence in the hydrocarbon market.

Likewise, protection actions were evaluated to safeguard the integrity of the Nor Peruano Pipeline, an important asset of Petroperú that is necessary to guarantee the production and supply of oil to meet internal demand.

At the meeting, the minister also discussed the use of MINEM balance sheets that will finance 11 projects for water, sanitation and construction of educational infrastructure in native communities and population centers located in areas of influence of hydrocarbon concessions in the Loreto regions. , Ucayali and Amazon.

It should be noted that, in addition to the minister, the deputy minister of Hydrocarbons of the MINEM, Martín Dávila Pérez, the vice president of the Petroperú board of directors and in charge of the presidency, Carlos Vives Suárez, the general manager (e) of the company took part in the meeting. , Cristina Fung Quiñones; in addition to Isabel Tafur, president of the Perupetro board of directors and Daniel Hokama, general manager.

“By almost any metric, 2023 is shaping up to be an especially challenging year,” according to Diego Macera, head of think tank Instituto Peruano de...

It will supply steam and electricity to the new Petroperú refining complex and will be integrated into the National Interconnected Electric System.

We must accelerate the massification of natural gas in Peru