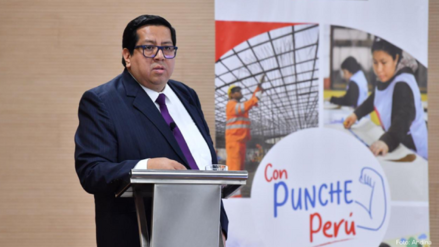 This is an automated translation of the original release published in Spanish.

Statement from the Ministry of Economy and Finance

The Minister of Economy and Finance, Alex Contreras, presented the progress in the implementation of the 'Con Punche Perú' Plan, indicating that more than 50% of the measures that make up the plan have been approved in less than a month, taking into account that the plan was presented last December 29.

"We are advancing quite quickly with the 'Con Punche Perú' Plan, fulfilling its objective of being a plan of rapid implementation measures that aim to reactivate the economy of various sectors, but especially to serve the most vulnerable sectors," he explained.

Minister Contreras indicated that all the measures considered to be part of the family economy reactivation block are already in full implementation after their approval. Among them are: the extraordinary subsidy for beneficiaries of the Juntos, Pensión 65 and Contigo programs, with bonuses between S/ 200 and S/ 300 and that will mitigate the effects of inflation on the food purchases of 1.4 million beneficiaries.

Likewise, the strengthening of the public food kitchens has been approved with an item of S/ 98 million, benefiting 224,438 people who use them. In addition, as part of this measure, Qali Warma has been empowered to use its purchasing model to purchase food for public kitchens, speeding up the process to obtain food for these organizations.

He also indicated that financing has been approved to promote the Natural Gas Massification Program with S/ 491 million, hoping to achieve 110,000 new connections of this service in the short term. Likewise, a bonus for public officials, servants and pensioners of S/ 200 was approved, which required an item of S/ 363 million.

Regarding the measures aimed at regional reactivation, measures have been implemented such as support for the new management teams of local and regional governments, the expansion of financing options for SERVIR managers, and the promotion of FIDT 2023 for municipalities.

While in terms of measures aimed at sectoral reactivation, the extension of the validity and term of the reprogramming of Reactiva Perú, FAE TEXCO and FAE TURISMO has been approved. In addition, the temporary release of deduction accounts and extension of tax obligations to Mypes.

It should be noted that other additional measures have been integrated into the plan, such as the granting of competitive subsidies to artisans, the granting of an economic subsidy in favor of cultural workers registered in RENTOCCA and measures for the monitoring and efficiency of public spending; measures that have also been approved and are in full implementation.

Minister Contreras indicated that the 'Con Punche Perú' Plan will be reinforced with measures that are part of the request for delegation of powers in economic matters requested by the Executive Power for the implementation of other measures that maintain the same sense of reactivating the economy of the Peruvians.

“The request for the delegation of powers in economic matters revolves around three pillars: the promotion of public investment, economic and financial management, and improvement in tax aspects and formalization. This request concentrates a package of 24 measures that have the same spirit as the 'Con Punche Perú' plan”, he explained.

It should be noted that this group includes measures such as:

Measures such as the creation and provision of the fiscal cadastre for the municipalities have also been considered; the use of resources from privatization processes and concessions to finance prioritized State policies; simplification of the simultaneous control of State-to-State contracts.

The minister indicated that the Government is making efforts to reactivate the Peruvian economy through the promotion of new growth engines given that we have high potential in sectors such as agro-exports and mining. In addition, the implementation of measures that make it possible to generate greater dynamism in the regional economy by reducing existing structural gaps, guaranteeing investments, within a framework of fiscal responsibility.

Following the investment decision anticipated in the second half of 2024, the project is expected to be developed over a three-year...

The new PPP regulation incorporates improvements to project management, in addition to expanding the threshold so that a set of projects can be eva...

Peru's consumer lending boom: How long will it last?

Want to read more information about More than 50% of the measures for economic reactivation in Peru have already been approved?