This is a machine translation of Osiptel's press release

A total of 1,182,977 claims were filed by users of telecommunications services with the operating companies during the first half of the year, which meant an increase of 54.81% compared to what was reported in the same period of the previous year, reported the Agency Supervisor of Private Investment in Telecommunications (OSIPTEL). 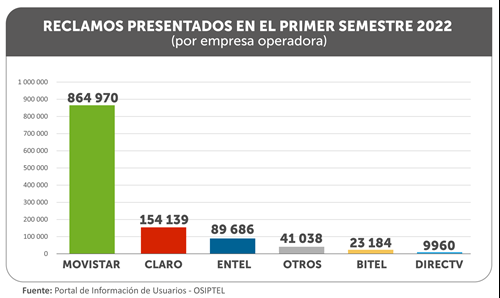 Movistar with the highest incidence of claims

According to the data published in the User Information Portal , the claims for the mobile telephone service were the majority, reaching 54.06% of the claims presented by the users before the operating companies. On the other hand, the claims for the fixed telephony service represented 32.04%; fixed internet access, 7.78%; pay television, 5.60% and packaged services 0.52%.

According to the analysis of the Directorate of Attention and Protection to the User of OSIPTEL on the incidence of complaints in the mobile service, Movistar has the lowest performance among the operating companies, registering 16.9 complaints for every 1,000 mobile lines. Meanwhile, at the other extreme was Bitel, which only filed 4.2 claims for every 1,000 mobile lines.

Satisfaction and fidelity in the mobile service

Users have the right to file a claim if they are not satisfied with their public telecommunications service. The higher incidence of inconveniences or problems with the services, as well as inadequate attention to claims, influence user satisfaction and their level of loyalty with their operating company.

To learn more about the performance of public telecommunications service operators, go to the OSIPTEL Observatory, through the following link: https://www.osiptel.gob.pe/observatorio-osiptel/

Office of Communications and Institutional Relations

The Chilean telco has completed 83% of its deployment plan and currently has 5G coverage in 222 municipalities in the country in the 3.5GHz band.

OSIPTEL: 88.4% of Peruvian households have a smartphone

Want to read more information about Movistar registers the highest incidence of complaints in the mobile service and fixed internet service in the first half of 2022?