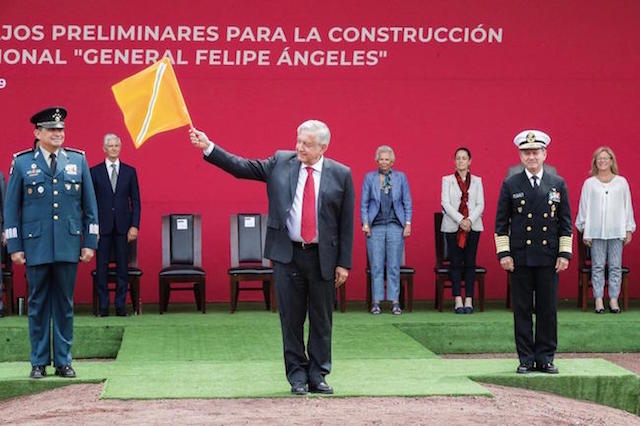 Mexican President Andrés Manuel López Obrador (AMLO) has laid the first stone of the new international airport at the Santa Lucía military air base in the Mexico state municipalities of Zumpango and Tecámac.

In a ceremony at the base to launch preliminary works on the project, AMLO (pictured) pledged that the first phase of the airport will be completed and in operation by 2021.

“The budget that is initially earmarked [for the project] will not be increased as has been customary… What happened to the Mexico City-Toluca train, which was initially estimated at 30bn pesos [US$1.5bn] and which will end up needing 90bn pesos to complete, will not happen here,” AMLO said.

Although planning of the project is at a stage where construction could already begin on the two additional runways projected for the airport, authorities have decided to wait until the EIA prepared for the project receives final approval from environment ministry Semarnat, the president said.

“We want to comply fully with existing regulations, and not give any excuse [to the project’s detractors],” he added.

AMLO also said that the relevant consultations with the residents of the area surrounding the airport have already been conducted, with the majority of the participants expressing approval for the project.

Meanwhile, Manuel de Jesús Hernández, commander of the Mexican air force and who also spoke at the event, said that Santa Lucía offers the ideal conditions to become a mixed-used airport.

The officer said that, in the first stage, the airport will have capacity to handle 20mn passengers a year. This figure will increase to 80mn when the facility reaches its maximum capacity in 50 years' time.

Santa Lucía forms part of a three-airport system that the federal government is proposing to deal with over-capacity at the existing Mexico City airport, AICM. The other two components of the system are the AICM and the international airport serving Mexico state capital, Toluca – both of which are set to be upgraded.

CANCELLATION OF THE NAIM

AMLO also addressed the cancellation of the mega airport that was being built on the bed of the former Texcoco lake, also in Mexico state, saying that Santa Lucía will be an example of honesty and austerity in public works, unlike the cancelled project.

The president highlighted the fact that building the airport in Texcoco would have meant the cancellation of operations at both the Santa Lucía air base and AICM, given that simultaneous operations at the three airports were not feasible.

“Building the airport in Texcoco would have meant investing an initial 300bn pesos and having it ready by 2024. Whereas, with Santa Lucía, we get to keep the Mexico City international airport and build two additional runways, which in addition to the one used for military operations, will give us a total of five runways.”