2 mobility projects advance in the Valley of Mexico 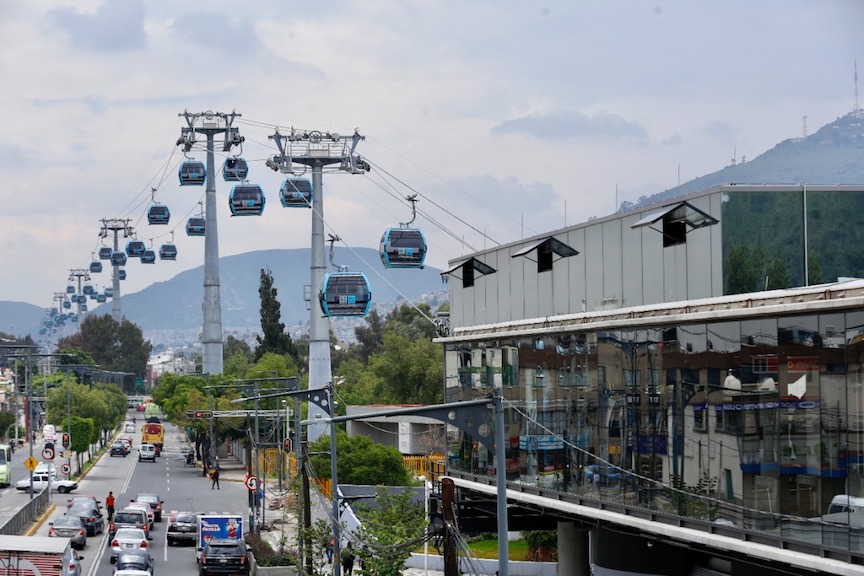 Plans for two new urban transport projects are moving forward in the Valley of Mexico, with authorities stepping up efforts to complete them before 2023.

One concerns a third cable car line in downtown Mexico City, while the other involves a new bus corridor to connect eastern Mexico City and Mexico state.

BNamericas takes a look at these projects.

Mexico City is advancing plans to start this year construction on the 5km Cablebús line No. 3, a cable car to connect the four sections of the Bosque de Chapultepec area, following the tendering of the cost-benefit analysis to determine feasibility.

While promised a few years ago by mayor Claudia Sheinbaum as part of her goal to establish the capital's first cable-car system, known as Cablebús, the future of the third line was uncertain until Thursday, when she confirmed construction plans.

“The four sections will have connectivity from the first to the fourth. There will be a Cablebús that will connect the four sections and different connections such as pedestrian bridges ... The Cablebús [project is] 5km, from the first to the fourth section,” she said during the presentation of the 10bn-peso (US$478mn) Chapultepec park project at President Andrés Manuel López Obrador’s press conference.

Although Sheinbaum did not announce a date for construction start nor when the tender will be launched, the park, involving an interconnection between all four sections of the Bosque de Chapultepec with the Campo Marte military parade grounds, is planned to open in December 2023.

The Sheinbaum administration has already completed the first two new Cablebús lines, and at least one firm, Leitner, will bid in the third line’s tender, as confirmed by exports director Dominic Bosio during BNamericas’ 2022 infrastructure opportunities webinar in Mexico.

Leitner in consortium with Pomagalski was the main EPC/EPCM contractor on line No. 2, which opened in August 2021. The 10.6km line links the areas of Santa Catarina and Ermita across the capital’s Iztapalapa district.

For line No. 1, Doppelmayr México was the main contractor in consortium with Gami Ingenieria e Instalaciones. The line, which opened in July 2021, links the areas of Cuautepec and Indios Verdes, in northern Gustavo A. Madero municipality.

Construction for the 7.3bn-peso trolleybus corridor between Chalco municipality in Mexico state and Santa Martha metro station in Mexico City is also moving forward this year. The contract was tendered last year.

Local media reported on Thursday that the federal government and Mexico state signed a collaboration agreement to assign responsibilities. However, the outlets did not reveal sources or publish the document.

BNamericas contacted the infrastructure, communications and transportation ministry (SICT), which supposedly signed the agreement; Mexico state’s mass transit and cable car systems authority Sitramytem, which awarded the contract to build the corridor in September to a consortium comprising La Peninsular Compañía Constructora and Alcance Total; and Mexico City and Mexico state’s mobility ministries, Semovi and Semov, respectively, but none of the agencies could provide a copy.

According to daily Milenio, SICT will provide Semov with all licenses and permits to supervise works and operation, in addition to legal advice.

It also said the project will run along the Mexico-Puebla highway, linking central-east Mexico City and Mexico state.

A previous collaboration agreement was signed between Mexico City and Mexico state in October, however, according to BNamericas’ records.

Regardless, the project is expected to advance, as its contract specifies that construction will take 16 months.

The project will complement Mexico City’s efforts to improve transport in Iztapalapa district, where a cable car line has recently been completed and an elevated trolleybus system will be opened in November.

The 20km Chalco-Santa Martha trolleybus line will follow the same route as a suburban rail line President Andrés Manuel López Obrador promised to complete before the end of his term in 2024.

The agreement is a legally binding document that will establish the revenue split between the U.S. and Mexico for the toll affiliated with the Otay...

Cutzamala supplies some 16,000l/s to areas of Mexico City and the capital’s metropolitan area.

Want to read more information about 2 mobility projects advance in the Valley of Mexico?