Timeline: How the Mexico-Toluca train survived despite soaring costs 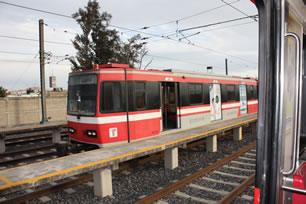 “It was already very advanced, we couldn’t just suspend it. What we have to do is finish it,” AMLO said at his press conference on Thursday.

The previous administration had originally estimated the project’s cost at about 30bn pesos (US$1.3bn), but the government ended up paying 60bn pesos and another 20bn pesos were required to resume construction last year, according to AMLO.

Work on the line began in 2015, with completion originally scheduled for December 2017. The deadline was pushed back several times due to changes to the original route and opposition from local farmers that paralyzed works on a section for three months.

None of the projects were completed and only one began construction, the 58km link between the city of Toluca in Mexico state and Mexico City’s metro system.

The communications and transportations ministry (SCT) signed a commitment agreement with Mexico state to finance the development of the Toluca-Mexico City rail line.

The price tag was set at 38bn pesos.

In July, ICA won a tender to build the 4.6km tunnel that will form part of the train’s route for 2.9bn pesos.

In November, a consortium led by Spanish firm CAF won a 13.6bn-peso contract for the provision of trains, rail and communication infrastructure, ticketing facilities and associated services.

In December, a consortium led by Caabsa Constructora walked away with a contract to build the third stretch of the railroad with a bid of 10.4bn pesos.

Construction went on until October, when the government decided to modify the project’s route after receiving complaints from local residents.

The project’s costs began rising when SCT reallocated 7.39bn pesos to the line. Back then, the ministry admitted that costs had risen to 44bn pesos.

In mid-June, the project had reached 70% progress but political parties from the opposition called on federal and state authorities to halt works due to environmental concerns.

At the end of the year, Peña Nieto confirmed the project would not be completed in 2018, when his term ended.

AMLO took office in December, promising to finish the railroad.

In November, the government and the private sector confirmed a 20bn-peso investment from private firms to complete the project under the first stage of the 2020-24 national infrastructure program (PNI).

However, an additional 7bn pesos were needed and the government assigned 3bn pesos of that amount in the 2020 federal spending budget.

The source of the remaining 4bn pesos would be decided later this year, according to government officials.

The project resumed its construction in December.

On July 30, Mexico City mayor Claudia Sheinbaum said the government could take over construction of the third stretch, which runs 17km from the Observatorio metro station to the Santa Fe area, local daily El Economista reported.

The 58km-long line will have six main stations – Zinacatepec, Pino Suárez, Tecnológico and Lerma in Mexico state and Santa Fe and Observatorio in Mexico City – and will shorten travel time to 39 minutes from 1-2 hours, depending on traffic.

An additional stop at Toluca international airport, one of those in AMLO’s proposed three-airport system for Mexico City, has been proposed.

When completed, the line will transport some 23mn passengers per day, according to estimates. 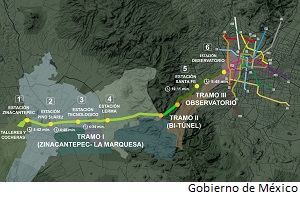 Bids for the three stretches may be submitted separately until August 25.

Authorities said in May that the work would be completed by June. The 7.4km line in the Iztapalapa district on southeastern Mexico City has already...

No slowdown likely for LatAm datacenter industry in next decade - Vertiv

Mexico’s Maya train back on track after court overturns suspension

Energy transition: The pending challenges for 'the cleanest region on the pla...

Want to read more information about Timeline: How the Mexico-Toluca train survived despite soaring costs?