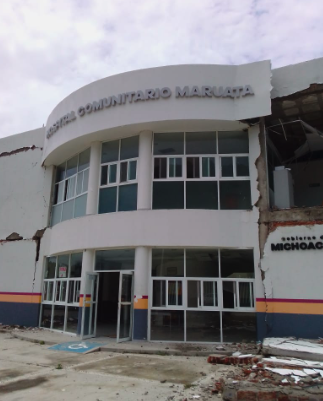 In Colima state, seven hospitals, five bridges and eight highways were affected, according to information provided by the civil protection services.

“It has been estimated that 153 homes received structural and façade damage, 20 other buildings were also affected, as were two religious temples, seven clinics, five bridges and eight landslides affected highways. The national water commission [Conagua] is also evaluating Trojes dam due to cracks,” national coordinator Laura Velázquez said during a press conference in Mexico City.

In Michoacán state, where the epicenter of the quake was recorded, there was also damage, with 21 hospitals and 30 schools affected.

On Monday evening, the infrastructure, communications and transport ministry (SICT) reported that the “La Salada” highway between Colima and Tecoman was damaged, as well as the Cortés bridge. The Pátzcuaro-Lázaro Cárdenas Siglo XXI highway was also partially blocked by a rock fall.

“I can say that the result wasn't too dramatic or severe. I would say that we were lucky,” President Andrés Manuel López Obrador said at a press conference on Tuesday.

The company even created a special purpose vehicle to attract US$10bn in investments.

The works are set to start after a contract was awarded in September to build three lines in Monterrey, northern Mexico.