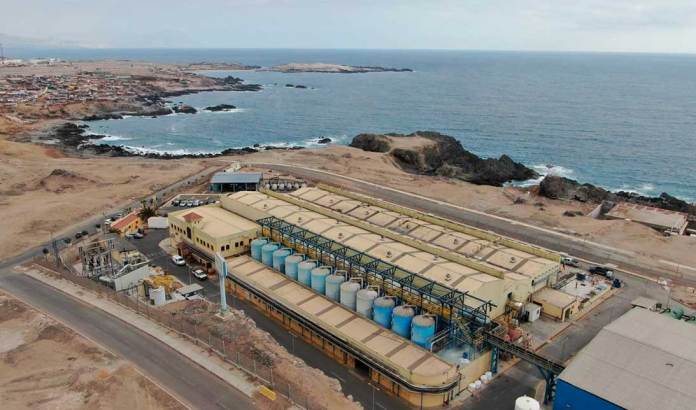 Chilean water utility Aguas Antofagasta plans to keep expanding its desalination capacity both in regional capital Antofagasta and the municipality of Tocopilla, despite criticism of the alleged environmental impact of brine discharges into the sea.

In December, the company received environmental approval for a US$115mn project to increase the capacity of its plant (in photo) in Antofagasta city to over 1,600l/s, and expects to have the expansion ready by late 2023 or early 2024, the firm’s operations manager Cristián Jiménez told BNamericas at the Desalination Latin America congress held by Vostock Capital.

He said the expansion will be Aguas Antofagasta’s largest project for the next three years.

As for the plant in Tocopilla, while it has capacity of 100l/s, it currently produces only 75l/s, but Jiménez said that will likely increase as demand rises.

On the brine discharges, Jiménez said Aguas Antofagasta is carrying out studies with local universities to determine the conditions in the area near its undersea outflow pipe.

Some observations actually detected an increase in certain fauna species in the zone, and even some species that were not seen before in the area, which he said shows there is a lot of misinformation surrounding the issue.

“I’m not saying that brine is a harbinger of life, but as an industry we need to know how to inform correctly and bring evidence to the table that allows all parties to see that it’s not toxic sludge and that there are many tools to lessen its impact on the maritime environment,” he said.

The volume of wastewater discharged on the Antofagasta coast has not been determined.

'Recycling is a very useful tool, but it is not the solution to drive circularity'