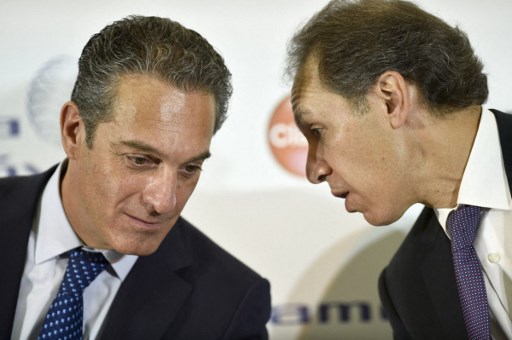 Mexico's América Móvil sees its customer support and operational structure in Colombia as a competitive advantage over commercially aggressive newcomers, such as Novator Partners’ WOM.

At least in public, the telco run by CEO Daniel Hajj (pictured, left) is not particularly concerned with the new player.

“WOM in Colombia is very aggressive, their plans are very aggressive. But it’s not only about ‘aggressiveness’. You need to have a good network, good branding, customer care centers, good distribution networks,” Hajj said in a call with investors.

“There’s a strong competition … but we feel comfortable. We're investing in the network, we have good quality and the convergence [of services] is very important for us. We're competing against good competitors, but we feel we're in a positive position in Colombia," he added.

Immediately after its launch in Colombia, WOM opened three contact centers with more than 1,000 service agents.

“It would appear that [Colombian] operators have been more interested in their profit margins than in lowering prices to ensure that the remaining 80% of the market, which is prepaid, could migrate from that modality. It’s precisely these conditions that we want to generate,” Bannister said in the interview.

According to the latest statistics, América Móvil's Claro leads in mobile and fixed services in Colombia, with a 39.4% market share in fixed internet and a 56.9% share in mobile internet as of the end of 2020.

ICT ministry MinTIC’s figures show Claro has been growing its mobile base in Colombia since the end of first quarter of 2020, although it has been losing ground in fixed broadband since the second quarter of 2018.

The figures do not yet show WOM, whose Colombian launch was last April. WOM’s goal is to reach a 25% share of the Colombian mobile market within three years.

In Chile, six years after debuting in the market, WOM surpassed Telefónica in the 4G segment, with a 24.9% market share, compared with the Spanish group’s 22.1% at end-March.

WOM also aims to end 2021 with 4G coverage in 374 Colombian municipalities, potentially serving 79% of the population and having over a million users.

The company also committed to investing US$1bn over the next four years in Colombia. It invested US$100mn in 2020 ahead of the commercial launch and the firm's capex for this year is US$130mn.

The goal is to transform the local mobile telephony market “through fair prices and an offer of competitive prepaid and postpaid plans, as well as a portfolio of mobile devices that meet the needs of Colombians," WOM Colombia CEO Bannister said.

Hajj reiterated América Móvil’s US$8bn global capex target (“5% more or 5% less”) set for the year, which he sees as “on track” to being met, and said no increases are expected in investments regardless of the expansion of services and networks.

The company’s H1 capital expenditures were 57.4bn pesos (US$2.7bn), down from 64bn pesos in the same period of last year.

The group is investing to upgrade its broadband networks, particularly in its two largest markets, Brazil and Mexico.

In Brazil, most of the network runs over traditional or hybrid fiber coaxial (HFC) cable and the company still has a small FTTH presence, whereas in Mexico América Móvil enjoys a much larger fiber footprint and customer base.

“We're making upgrades in our cable networks in Brazil to deliver greater speeds to our customers,” said Hajj. “We're going to tap all the HFC network. By the end of the year we'll upgrade 70% of the network to really deliver the speed [the market is demanding].”

Despite the limited FTTH presence, Claro Brasil leads in fixed broadband and ultra-broadband. According to the executive, 60% of the new sales in Brazil in Q2 involve plans with download speeds of at least 240Mbps.

Claro Brasil already has 3mn homes passed with fiber and 110 new cities with GPON (Gigabit Passive Optical Network), he said, adding that the focus in Brazil remains the offer of bundled packages, or combos.

Meanwhile in Mexico, 43% of the internet customer base is already on GPON, the rest being DSL cable, according to Hajj. In the first half this year, the company reported 1mn homes passed with fiber and the migration of 500,000 customers from copper to fiber.

He also said that the market has given a good reception to combos with Netflix, Disney+ and HBO Max.

Also in Mexico, the CEO said América Móvil expects Telmex to have its pay-TV license approved by regulator IFT this year. “We're asking for the pay-TV license for more than 10 years.”

Hajj also sees a recovery in the customer base from the worst moments of the pandemic.

“This year, today, we have more prepaid subscribers than we had last year, before the disconnections. People started to reconnect again."

Colombia and Central America are also growth markets in prepaid, as is the Dominican Republic, according to the executive.

In the postpaid segment, however, customers are “still a little bit wary because of the pandemic.”

Nonetheless, more than 2mn of the 4.2mn wireless subscribers América Mòvil added in the second quarter were postpaid, with Brazil accounting for 1.1mn postpaid net adds.