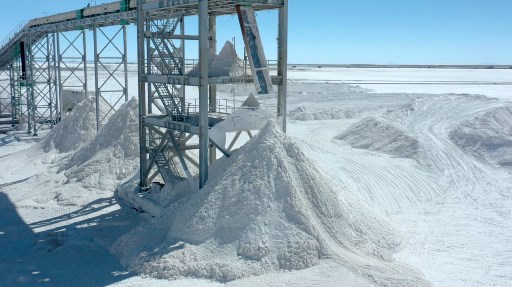 In the 500-seat chamber, 289 lawmakers voted in favor and 193 abstained. The main opposition parties sat out the vote after failing to delay debate, many claiming lack of familiarity with the proposal.

The bill now goes to the senate, which also seems likely to pass the legislation.

He added, “I make a respectful call to the legislators so that ... we protect lithium and lay out the structure for a company, like [state-owned power company] CFE, that will handle everything related to lithium, backed by the support of research facilities in the country and the experience learned from other countries.”

The proposal comes after the lower house rejected Sunday controversial reforms to the electric power sector after more than 15 hours of debate.

In the lower house, 275 representatives voted in favor and 223 against the package, with supporters unable to achieve the two-thirds majority needed to change the constitution.

That proposal contained similar aspects related to lithium as those proposed in the bill.

AMLO said the opposition committed treason by rejecting the reform, adding the parties will not succeed in halting the lithium bill.

“Now that the two-thirds is no longer required … they won’t be able to put our backs to the wall,” he said.

In general, the proposal outlaws direct private investment and production in the lithium sector and creates a state-owned entity (SOE) to extract, process, and sell lithium. In the past, this proposed entity was called Litiomex.

Specifically, the proposal modifies articles 1, 5, 9 and 10 which have promoted “an economic orientation in favor of large mining companies, both national and transnational corporations, to the detriment of the fundamental rights of Mexicans,” according to the statement of purpose.

Modifications to article 1 mention “the exploration, exploitation and use of lithium will be done by a decentralized public body.”

According to article 5, “the exploration, exploitation and use of lithium is declared to be of public utility, for which no concessions, licenses, contracts, permits, assignments or authorizations will be granted.”

Lithium deposits would be considered mining reserve areas and lithium be part of the national heritage.

Lithium value chains will be publicly controlled through the SOE, with the state guaranteeing several rights related to lithium exploitation, including living in a healthy environment and indigenous rights.

According to reforms to article 9, the national geological service (SGM) would help the SEO with exploration and article 10 would specify that the SEO would operate in line with the president’s preferences.

A separate transitory article establishes that the president must establish a mechanism to create the SEO within 90 business days after the decree takes effect.

But the nationalization drive could violate the USMCA treaty with the US and Canada, according to Kenneth Smith Ramos, who headed technical negotiations for the treaty’s predecessor, Nafta.

Smith said declaring lithium a strategic mineral, like certain radioactive minerals, either directly or indirectly as part of the process, would violate the USMCA commitments.

“Lithium cannot be reserved as a strategic mineral exclusively for the state if this particular sector was not already embodied in the treaty as a specific reserve. And it is not,” Smith said earlier this year at a panel on lithium nationalization that was part of the open debate on the electric power reforms.

Mexico's aspirations to become a global power in the lithium and EV battery industry have hit a number of roadblocks that Monday's win do nothing to resolve.

SGM director Flor de Maria Harp, for example, recently warned that exploring potential deposits will take many years, with no guarantee any will be economically viable.

And hopes of a swift start to lithium production suffered a setback after Bacanora Lithium confirmed a 12-month delay to its US$420mn Sonora project, a JV with China-based Ganfeng Lithium.

Sonora is Mexico’s only large advanced lithium asset. The country is not currently producing the metal.

As new investments are announced, several companies are planning to ramp up EV production in Mexico between this year and 2027.

Another Mexican solar project cancelled due to permit issues

The US$130mn Rengen solar park in the state of Chihuahua is no longer moving forward given current regulatory trends.