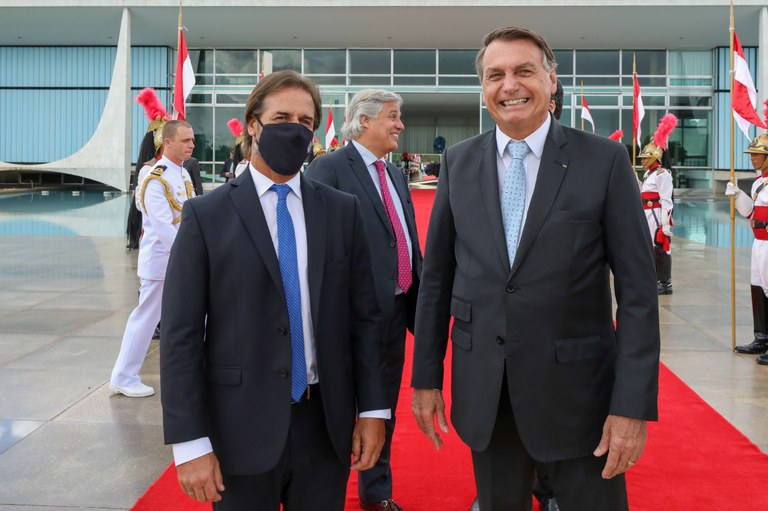 The presidents of Brazil and Uruguay, Jair Bolsonaro and Luis Lacalle Pou, held a meeting on Wednesday to discuss joint infrastructure projects between the two nations, as well as issues with South American trade bloc, Mercosur.

"Uruguay is our partner. It’s an important country that is a member of Mercosur. We also talked about the possibility of making each [Mercosur member’s] business with other nations more flexible. We discussed energy and infrastructure as well," Bolsonaro said in a press conference after meeting and having lunch with Lacalle.

The meeting between the two men was also attended by other members of Bolsonaro’s cabinet, including infrastructure minister Tarcísio Freitas, who underscored that Brazil is looking to promote South American integration.

"I'll highlight two [projects being discussed by both nations]. First, the dredging of Mirim Lake, which will make the Mercosur waterway a reality. That is a project that is well advanced and we’re able to do it. The second project to promote our integration is the second Jaguarão bridge. As soon as we have a budget, we’ll build the bridge, which will increase and strengthen the ties that exist between Brazil and Uruguay", said Freitas.

"In the face of the water crisis that Brazil has been experiencing since October last year, we have been importing energy from Uruguay and Argentina, and this shows that this integration is important for the country's energy security. We’re working to increase it even further, calling other Mercosur countries to participate," said Bento Albuquerque, Brazil's minister of mines and energy, who was also at the meeting.

Bolsonaro also announced that Brazil will host an official meeting of Mercosur leaders in March, welcoming the representatives of Argentina, Paraguay and Uruguay to debate issues related to the dynamics of the trade bloc.

Brazil has advocated the adoption of more flexible rules for Mercosur, including the possibility and each country might negotiate separate trade agreements with other countries and not just through the bloc.