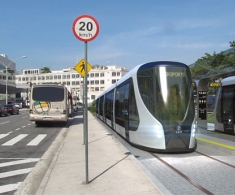 Approximately 1.61bn reais has been earmarked for the state government, with 816mn reais to be provided through a federal government grant and 800mn reais through financing. Another 600mn reais is going to Salvador city hall, with 300mn reais from the federal budget and 300mn reais from financing, according to a cities ministry release.

With 800mn reais in financing, the main investment being provided to the state government involves expanding Salvador's metro line 1 and 2. The project is being contracted through a 30-year concession under a public-private partnership (PPP), which has been awarded to highway and metro operator CCR (Bovespa: CCRO3).

Another 552mn reais, through a federal government grant, is going to the state to implement Salvador's light rail transport (LRT) system which will run through the neighborhoods of Comércio, Calçada, Paripe, and São Luís. The initiative involves restoring and upgrading 13.5km of track and acquiring 36 new VLT diesel trains.

The state has also been awarded a 248mn reais in federal government funding to deploy an 8km bus rapid transit (BRT) system between the neighborhoods of Águas Claras and Paripe and another 16mn-real grant for consultancy work to prepare other upcoming LRT projects, the release said.

For the consultancies, 10mn reais will be used to prepare the Simões Filho-Águas Clara LRT stretch and 4.5mn reais to prpare the Retiro-Santa Luizia LRT stretch. The remaning 1.5mn reais is for financial and technical viability studies for LRT stretches involving the Águas Claras, Cajazeiras, and Simões Filho stations.

Finally, all funds going to the city will be used to build a 12.7km BRT stretch between the neighborhoods of Lapa and Iguatemi. It will run along the avenues of Vasco da Gama, Juracy Magalhães and ACM and will integrate with the city's LRT and metro lines, according to the release.

All projects are part of the 50bn-real urban mobility plan announced by the president Rousseff in June.

The entire line will demand around US$100mn.

Paraná to offer port terminal leasing contracts worth over US$240mn