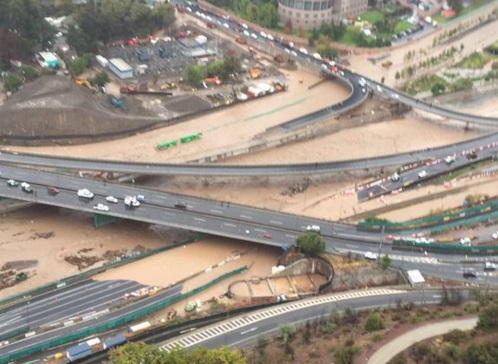 Authorities in Chile are blaming highway operator Costanera Norte and Spanish construction company Sacyr for the floods that wreaked havoc in capital Santiago on Sunday.

The Mapacho river, which runs through the capital, overflowed onto sections of the Costanera Norte east-west highway and surrounding roads as a result of inadequate mitigation measures carried out by Sacyr and under the administration of Costanera Norte, said Santiago metropolitan regional governor Claudio Orrego.

A supervisory filing from Chile's concessions unit, under the public works ministry, noted the risks a week earlier, citing that accumulated construction materials for the works highway posed a risk to drainage installations in the event of high precipitation levels.

The filing, which was entered on April 12, instructed that the concessionaire was to adopt preparatory measures, specifically to clear the hazardous materials and maintain the necessary conduction channels.

As part of a 30-year concession agreement, Costanera Norte is administering a package of works planned along the highway, which covers around 43km in the capital. Among components is the construction of the completed Pérez Zujovic overpass and the Kennedy avenue tunnel, the latter of which is being built by Sacyr.

Costanera Norte is held by Grupo Costanera, which is controlled by the local subsidiary of Italy's Atlantia and the Canadian Pension Plan Investment Board.

In related news, the weather system that brought the rainfall prompted Chilean private water utility Aguas Andinas to suspend water services in 27 districts within the Santiago metropolitan area due to high turbidity levels in the Mapocho and Maipo rivers, which supply the city.

Aguas Andinas' has since begun a gradual restoration of services and in its most-recent update indicated that services have been reestablished in 97% of households in its coverage area.