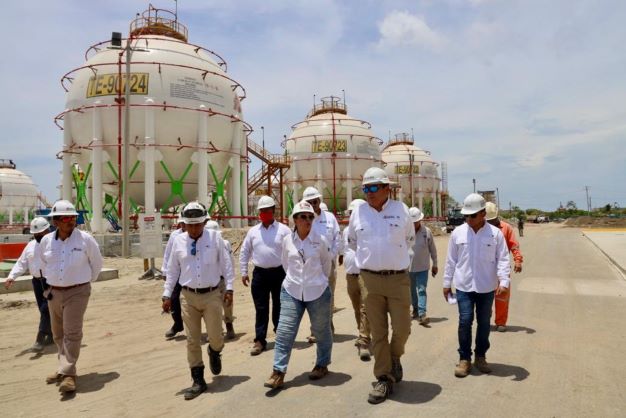 Spending on state-owned energy firms in Mexico is set to reach 18.8% of next year’s total, according to the finance ministry’s budget proposal.

In budget documentation delivered to congress Thursday, the government said Pemex has an investment plan for next year of 441bn pesos, or 65% of its total allocation.

Among the projects is the Olmeca (ex-Dos Bocas) oil refinery in Tabasco state, with soaring costs this year fueling speculation over its final price tag.

The 2023 budget sets aside 47.2bn pesos for Olmeca, or 2.23bn pesos more than was allocated for the flagship project in 2022. The energy ministry (Sener) held an inauguration for the plant on July 1

President Andrés Manuel López Obrador and energy minister Rocío Nahle insist first output will begin at Olmeca sometime in 2023 upon completion of what they dub the “integration” and “start-up/testing” phase.

Market observers with a critical view of the project suggest it is still years away from full operation, giving 2025 or early 2026 as more likely targets for reaching its 340,000b/d capacity.

The cumulative cost for the refinery (2019-22) adds up to the US$8.49bn originally proposed at the start of the project. However, the government reported that up to July 1 spending had already reached US$10.3bn and Pemex’s board of directors approved another US$6.50bn for the project in August.

Adding the last two figures, the sum of US$16.8bn would represent a 98% cost overrun compared to what congress had allocated in annual budgets, fueling speculation over the status and costs of completing the project next year.

Beyond Olmeca, investment projects for 2023 will continue to focus on ramping up upstream production and refinery output.

The budget proposal includes 27.9bn pesos for Pemex’s refined goods subsidiary PTI, of which 16.1bn pesos will go to continued modernization and expansion projects at the country’s six domestic refineries.

Pemex’s upstream unit (PEP) is set to receive 404bn pesos next year with E&P targeting fields with the highest chance of success.

Its logistics unit is budgeted to receive 7.52bn pesos to strengthen supply chains and distribution of its products, as well as to invest in treatment services, transportation, storage and dispatch.

The government said a large part of the allocation is related to the higher cost of the fuels that will be used for power generation, based on international price projections.

It has set aside 76.6bn pesos for this purpose to keep down domestic fuel prices and electricity bills.

The proposed funding for CFE also includes operations in the wholesale electricity market that the utility plans to execute next year, as well as additional costs related to natural gas transportation.

In the budget proposal, the finance ministry estimates that the average price of crude oil will be US$68.7/b next year, which is US$7.6/b higher than what the government predicted in its preliminary budget estimate in April.

The ministry also forecasts that the country’s crude oil production will be 1.87Mb/d (million barrels per day), or around 15% higher than the average in the first six months of 2022.

This level of production is significantly below the 2Mb/d goal set by AMLO for the end of his term in 2024.

Want to read more information about Mexico 2023 budget: More money for Pemex and less for CFE?