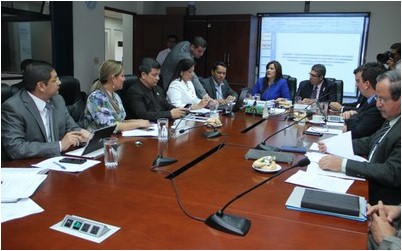 El Salvadoran lawmakers said the country will benefit from a natural gas supply deal with Mexico and Guatemala.

The fuel would enter El Salvador from Mexico via a new pipeline.

Mexico would contribute 60% of the financing for the pipeline and Guatemala 40% and it would take around four years to build.

In a meeting, El Salvador's foreign relations committee of the legislative assembly, the economy ministry and the national energy council (CNE) discussed the implications and benefits of ratifying additional protocols to the supply deal.

The deal is important because it will permit El Salvador to diversify its energy mix and reduce emissions and costs associated with power generation, the meeting heard.

"We have seen that natural gas is easier and cleaner than propane gas, but the distribution network is slower because tanks need to be built," Arena party lawmaker Edgar Escolán said

Deputy minister of trade and industry Merlin Barrera said the agreement will bring many possibilities, allowing for the lowering of energy costs for industry and households.

CNE president Luis Reyes said the ratification of the agreements is important to formalize El Salvador's participation in all of the associated technical, regulatory and trade meetings and discussions and negotiations.

El Salvadoran lawmakers continue to study the protocols, according to a legislative assembly release.

How Central America power demand may evolve in the near term

Did AMLO drive Pinfra to give up its Veracruz port concession?