Petrobras supercomputer expected to be fully operational by year-end 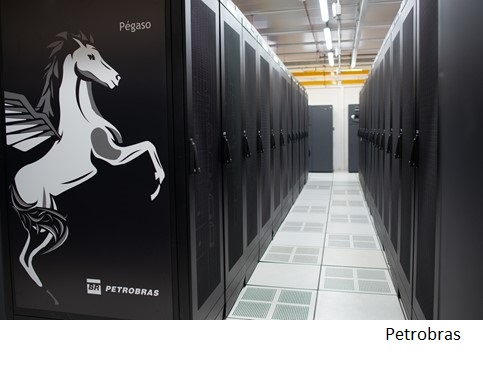 Brazil's national oil company Petrobras plans to have its newest, 300mn-real (US$55.8mn) supercomputer running at full capacity by the end of the year.

Dubbed Pégaso, the high-capacity processing (HPC) machine has a capacity of 21 petaflops and is already operating, the company said in a statement. One petaflop equals one quadrillion operations per second.

All machines were assembled and delivered by French IT company Atos, in most cases using equipment manufactured by Positivo Servers & Solutions, the IT infrastructure unit of Brazilian electronics maker Positivo.

The oil giant said Pégaso has the highest processing capacity of any supercomputer in Latin America and, citing the Green500 ranking, is the most eco-efficient.

According to Petrobras, Pégaso is also the fifth most powerful in the global oil and gas industry and the 33rd global supercomputer overall.

Investing in these machines allows the company to apply technical knowledge in the processing of geophysical and geological data to reduce uncertainties and project risks, as well as reduce the time between the discovery of an oil field and the start of production.

“Expanding data processing allows Petrobras to generate ever sharper subsurface images of areas mapped for oil and natural gas exploration and production, in addition to reducing the processing time of this information. This contributes to optimizing production, increasing the recovery factor of current reserves and maximizing the efficiency of the company's exploratory projects,” Petrobras' E&P head Fernando Borges said in a statement.

The investment is “essential” to enable strategic programs such as EXP100, which aims to achieve 100% use of data for exploratory projects; and the CEOS and the PROD1000 projects, whose goal is to reduce the deadlines for starting production, said the company.

Dragão has capacity of 14 petaflops and Atlas 8.9 petaflops.

Pégaso has 678 terabytes of RAM, in addition to 2,016 GPUs. The machine has 30t of components distributed in racks that, lined up, add up to 35m.

At full capacity, Pégaso will consume 1.5MW, equivalent to the annual consumption of a city of 6,800 inhabitants, Petrobras said.

Meanwhile, Dell Technologies won a tender to supply Petrobras with yet a new HPC machine and delivery is expected to begin in December. The new machine is expected to enter operation in 2023.

Raymundo Peixoto, Dell's regional VP of datacenter solutions, told BNamericas recently that the company is focused on securing new – and more robust – HPC contracts with large industries, such as in the oil and gas and utilities sectors, while doubling down on mid-sized prospecting companies in the retail and financial sectors.

According to Peixoto, Dell Technologies has “a few dozen” projects related to supercomputing under development in Brazil, Mexico and Chile, in the latter two with applications aimed mainly at scientific uses.

Want to read more information about Petrobras supercomputer expected to be fully operational by year-end?