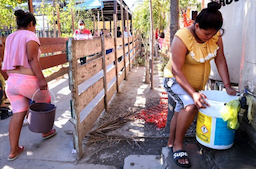 Severe drought in the US southwest is affecting northern Mexican states like Baja California, which depends on water it receives from the Colorado basin under a 1944 treaty.

Rather than building a desalination plant, as authorities proposed, Alfonso Cortez, an environmental researcher at Colegio de la Frontera Norte in Mexicali, suggests measures to produce a surplus, including treatment plants.

“[Desalination] is three or four times more expensive than using treated water or regulating extraction from aquifers. There is also an irrigation system whose water use should be optimized. Why is a desalination plant more expensive than those options? Because it consumes a lot of energy and pollutes the environment,” he told BNamericas.

The US recently cut 51Mm3 (million cubic meters) from Mexico’s allotment this year, equivalent to the amount of liquid used by Mexicali’s water system in a year, Cortez said. The possibility of cuts has been added to the treaty amid the recurrent droughts in the region.

Cortez, who in March 2020 participated in a study that led to the cancellation of the US$1.4bn Constellation Brands brewery, also said private entities must be part of the solution, but their primary focus should be environmental, economic, and social issues.

“One cannot use different arguments to support different projects. On the one hand, they said there was a lot of water, so they were going to build the [brewery] in the desert. On the other hand, they said there was no water, therefore they were going to build a desalination plant. They should not build projects that consume an enormous amount of water and create very little employment for the area,” he said.

Cortez said US investments are flowing into irrigation district 014 to help reduce treaty water consumption. He claimed that if investors from Tijuana would also step up, a water surplus of up to 100Mm3 a year could be created.

The Brazilian state is looking to raise at least 4.1bn reais with the privatization of Corsan.

Uruguay finalizes details of the incentive plan for packaging recycling

The ambitious proposals of Mexico's Morena party for water and sanitation