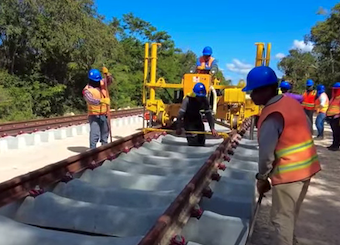 Work on the fifth stretch of Mexico's Maya train project, between Playa del Carmen and Tulum, are advancing despite legal problems related to a pair of lawsuits filed by Grupo México and Acciona Infraestructuras.

The two companies, which formed the consortium Desarrollo del Sureste Playa del Carmen-Tulum (DSPCT), were initially awarded the 17.8bn-peso (US$914mn) contract to build this section of the railroad in the Yucatán peninsula in February 2021, but the contract was terminated in July while works were being carried out.

In his daily press conference on Monday, President Andrés Manuel López Obrador said the decision was made due to a breach in the contract by the consortium under a clause in the national public works law. The article in question states that government agencies can "terminate contracts early when there are reasons of general interest; there are justified causes that prevent the continuation of the work, and it is demonstrated that continuing with the agreed obligations would cause serious damage or harm to the State."

In a statement responding to the president, Grupo México said: "The early termination was due to the technical inability to carry out the project in 11 months and deliver it in July 2023. A breach of contract as a result of the new delivery dates requested was avoided. The consortium did not commit any breach during the term of the contract."

Following the contract termination, national tourism board Fonatur, in charge of the full 1500km rail project, assigned 30.4bn pesos to the national defense secretariat (Sedena) to take over the works. Sedena then hired three other private companies to build the stretch: ICA, Mota-Engil, and Azvindi.

The consortium DSPCT filed a lawsuit on September 5 to challenge the government’s decision to terminate the contract and a second lawsuit was reportedly filed on October 26 to contest the 37.9mn-peso compensation payment awarded to DSPCT, daily Reforma reported.

The news apparently caught the president off guard in his press conference, as he claimed no knowledge of the second lawsuit. López Obrador added that he had previously contacted the CEO of Grupo México, Germán Larrea, who he said had agreed with Sedena on the compensation amount.

“It's interesting to me that I contacted Germán Larrea to negotiate to have the military engineers prepare a report to define how much [the consortium] should be paid and he agreed, but today we've heard the news that he's going to sue us …. We will pay what is fair,” said López Obrador.

Want to read more information about Work on stretch 5 of Mexico's Maya train rolling on despite lawsuits?