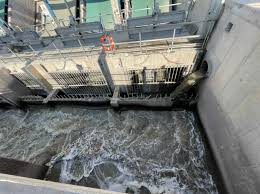 Despite the efforts of Chile's authorities and water utilities, capital Santiago looks to be heading towards water rationing, with the wealthiest districts of the city likely to be first in line.

Earlier this month, Vitacura mayor Camila Merino said that her administration was planning to reduce district-wide water consumption by 20% in the short term, and that the neighboring Las Condes and Lo Barnechea districts are also likely to face scheduled water cuts if rainfall is insufficient.

This is because these three districts obtain their water from the Mapocho River where water volumes are at record lows, according to Merino. Most of the rest of the metropolitan region is supplied from the Maipo River.

To counter this, Santiago utility Aguas Andinas is carrying out a 17bn-peso (US$21mn) expansion of its potable water plant in La Reina district, which will boost water provision in Vitacura, Las Condes, Lo Barnechea, La Reina, Providencia and Ñuñoa.

The project entails increasing the plant’s capacity from the current 1,300l/s (liters per second) to 2,300l/s. Works began in mid-2020 and are currently 85% complete, the public works ministry (MOP) said in a release.

Meanwhile, public works minister Juan Carlos García said the ministry has not ruled out charging over-consumption as is currently done with electricity.

“Water also has a solidarity aspect. What’s overused in one area is underused in another,” he said.

NO DECISION ON MEASURES

With Chile entering its 13th consecutive year of drought, water scarcity is one of the main challenges faced by minister García, who took office on March 11.

However, he has yet to make a specific proposal to address the ongoing crisis.

Earlier this week, the minister told daily La Segunda that the MOP was analyzing possible measures, and that the new administration would support the previous government’s bill to create a water department within the ministry, while also making some amendments to the initiative, albeit without giving any details.

He did not take a position regarding an initiative proposed by the environmental committee of the constitutional convention that would place all water management in the hands of the state and user organizations, although he did agree that the state should have a bigger role in the issue.

García added that the whole system of infrastructure concessions needs to be reviewed, but he did not give any details on how that might be done.

The current concessions and system of water utilities were outlined during the administration of Christian Democrat president Eduardo Frei (1994-2000), who is now the head of infrastructure think tank CPI.

A source close to CPI told BNamericas that the organization “is awaiting more concrete definitions” before commenting on García’s statements.

Chile is facing a severe drought that has affected mining. Desalination plants are a solution to maintain and increase production, while complying ...