Spotlight: Peru getting back on the right connectivity path

However, a plan to build a massive state-owned fiber network to confront connectivity challenges backfired due to excessive pricing that led private operators to build their own infrastructure, leaving the state with an underutilized network.

After commissioning international consulting, a renewed business model is now being proposed to digitize the country as 5G looms.

The country has made strides in connectivity over the last four to five years. According to telecoms regulator Osiptel, Peru had 27.2mn internet connections in 2Q19, 91% of which were mobile.

While 73% of homes have internet, according to the watchdog, almost 90% of those are in urban areas.

Consultancy IDC forecasts that Peru will end the year with 43.3mn accesses, a yearly growth of 6.4%, keeping in mind that IDC measures connectivity by also considering data from SMS, M2M and other data packages. 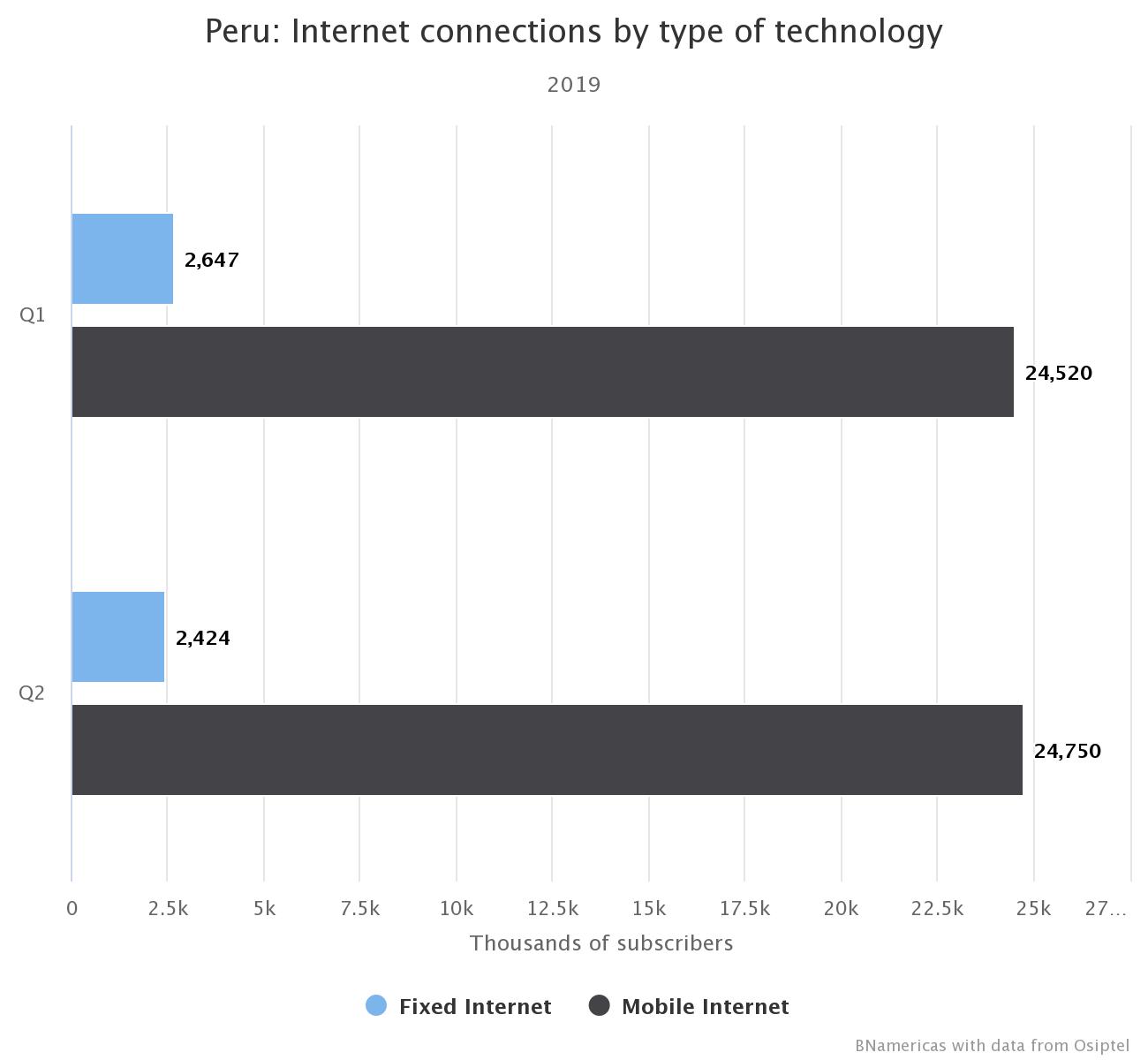 A PAIN IN THE BACKBONE

To connect remote areas not covered by private telcos, the government awarded in 2014 a concession to Mexico’s Azteca Communications to build and operate a 13,000km fiber optic backbone cable dubbed RDNFO with an estimated investment of US$323mn.

RDNFO is designed to connect 22 regional and 180 of the country’s 196 provincial capitals as capacity would be sold directly to local public institutions and private telcos.

However, five years later, only 10% of the capacity is reportedly being used. The fixed fee of US$23 plus tax per megabyte established for the RDNFO was seen as expensive and the private sector has built its own infrastructure in parallel.

Bitel, for example, a unit of Vietnam state operator Viettel, which entered the market in 2014 as a mobile operator, has rolled out a 34,600km fiber network, the country’s largest.

Erick Iriarte, a local telecoms lawyer with Iriarte y Asociados, attributes the connectivity problem to an erroneous government strategy that focused on rolling out fixed broadband, didn't consider a more flexible view of connectivity, and failed to anticipate the growing popularity of mobile.

“When you focus on a particular technology rather than prioritizing narrowing the digital divide, this is the result, you’re left with an infrastructure monster, a white elephant,” Iriarte told BNamericas.

“The government put all of its eggs in one basket and didn’t bet on a company like Bitel building its own backbone in parallel.” 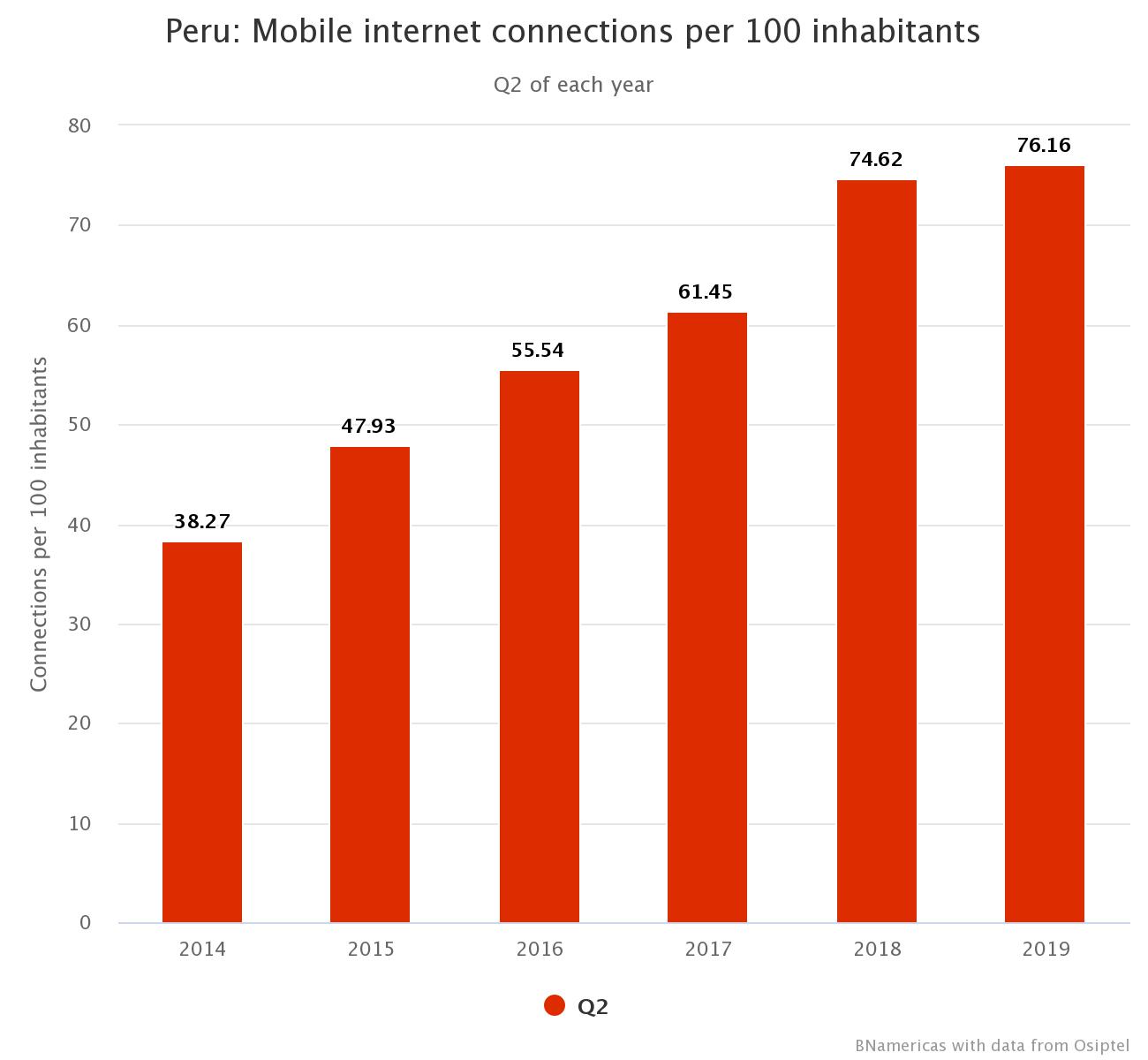 Peru’s regional plan is to connect 900 localities to RDNFO by 2021 with Ayacucho, Lambayeque, Apurímac and Huancavelica going live this year. A total of 21 regional offshoots are being tendered gradually.

According to Carlos Sotelo, a lecturer in telecommunications strategy at Universidad Nacional Mayor de San Marcos, RDNFO has several problems.

Based on the advice of the World Bank, Peru’s transport and communications ministry MTC began a strong focus on accelerating the activation of regional projects connecting to the backbone, while at the same renegotiating the contract with Azteca.

Problems identified include the high tariffs for accessing the network which means it is cheaper to go with a private company.

Another problem is that Azteca’s contract prohibits it from offering international traffic to avoid competition with private concessionaires, which would boost the likelihood of filling capacity.

In a recent interview with BNamericas, Peru’s deputy communications minister Virginia Nakagawa, said, “it didn’t make any sense…That was wrong. It’s the opposite. It’s the very possibility of international connections that adds value to the network and to the private partners making use of it. Because you have a network that can connect five countries. You have the submarine cables landing in Lima!”

A revised economic model has been proposed to Azteca with more flexibility on tariffs and discounts based on volume. The company is still considering its options.

In a blog post, lecturer Sotelo wrote the RDNFO, as its stands, will limit initiatives such as distance learning, telemedicine, e-government, and overall digital competitiveness, which are crucial ends in providing connectivity.

He recommends allowing the RDNFO to sell capacity to district as well as provincial capitals, thus creating a single transport network from Lima to the rest of the country.

Sotelo  also said the government must increase the capacity granted to public bodies, which currently stands at 2Mbps for a school, when the global average is 100Mbps.

But the telecommunications market has also seen upsides.

The market is more dynamic than it was five years ago thanks to the entrance of Bitel and Entel Peru (a unit of Entel Chile) in 2014, which have reached mobile market shares in June of 16.2% and 18.6% respectively, pinching subscribers from Claro (América Móvil) (28.1%) and Movistar (Telefónica) (40%).

Introducing number portability and lowering termination rates has boosted competition in both prepaid and postpaid offerings.

According to the Cable.co.uk broadband pricing comparison, the average cost of broadband in Peru is US$45.9 per month, similar to countries like Brazil, Colombia, Bolivia, Chile, Brazil and Uruguay, while average speed was 2.86Mbps compared to 3.89Mbps in Chile, 2.83Mbps in Argentina and 4.84Mbps in Brazil.

Four MVNO licenses have been granted to Incacel, Cuy Móvil, Dolphin Telecom and Famagusta, though by June, only Incacel had any registered subscribers (13,508).

Regulation is on track too. The International Telecommunication Union’s (ITU) 2018 regulatory tracker ranked Peru’s telecoms regulatory record as third highest in Latin America after Mexico and Brazil, underscoring Osiptel’s autonomy and impartiality, its ability to execute decisions and impose sanctions and resolve disputes.

But the report also identified concession licensing, spectrum management and universal service as areas for improvement, saying the latter should fall under the remit of a regulatory authority.

In March, the former universal services fund Fitel was replaced with Pronatel, a new fund designed to enable more efficient and transparent use of resources.

In 2018, Osiptel became the first Peruvian regulator to undergo the Performance Assessment Framework Economic Review (PAFER) methodology of the OECD, which recommended the watchdog to digitize more, automate tasks and boost the development of open data systems.

“The role of the regulator has been favorable to encourage greater competition among the operators, which in turn has led to an improvement in the quality and price of communications services, which is key for greater competition,” Carlo Dávila, IDC senior analyst for Peru and Latin America, told BNamericas.

All four network operators have carried out 5G tests.

“The spectrum auctions will lead to increased investment not only in mobile infrastructure but also fiber optics in more regions in the country, which is fundamental for increased connectivity,” Dávila said.

Alternative connectivity initiatives are also emerging. One of the most prominent is a joint venture between Telefónica, Facebook, the Inter-American Development Bank’s (IDB) investment arm IFC and the Latin American development bank (CAF).

Under the Internet for All (IpT) project, these players aim to connect 30,000 Peruvians in rural areas to 4G by 2021.

In November, Telefónica reported that the project had already connected 5,300 communities and 800,000 people to mobile broadband in La Libertad region and is aiming for 110,000 by year-end.

IpT will offer wholesale 4G services to other mobile operators, in a wholesale Network as a Service model (NaaS) as well as a revenue sharing model that would enable mobile operators to deliver communication to individuals, businesses, and other organizations in rural communities.

Economic sustainability would come through partnerships with local communities and by using open technologies that will reduce the cost of deployment in areas where current technologies are too expensive.

Alphabet’s Loon has used its network of internet balloons to provide connectivity to areas of Peru which have been affected by natural disasters, for example in July this year in partnership with CenturyLink, following an 8.0 earthquake, and in 2017 following devastating flooding.

CenturyLink holds the experimental E-band license in Peru for Loon's backhaul services, which are still in a testing phase for commercial use.

In the end, connectivity is relevant only in its ability to transform and digitize industries, according to Dávila of the IDC.

“There is still a lot of room to transform different sectors such as finance, retail, education and healthcare. To achieve that, companies will have to develop new ways of working with data based in the cloud and manage more efficiently their networks using technologies like SD-WAN. These factors will be key for increasing connectivity throughout the country."

BNamerica rounds up the latest news on regulatory issues, public consultations and appointments to ICT regulators in the region.

Sencinet completes installation and brings connectivity to 200,000 students in rural areas of Peru

After winning the tender in October last year, Sencinet installed VSAT antennas in all educational establishments. These teams communicate via sate...

More than 22,000 Peruvians will access telecommunications services for the first time

The woes of Peru's fiber backbone and Rednace connectivity projects

Want to read more information about Spotlight: Peru getting back on the right connectivity path?