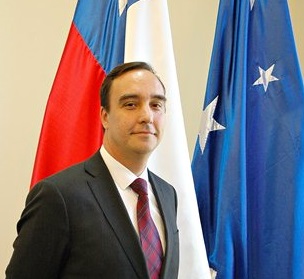 Almost two years after the first election of regional governors in Chile, they have already begun to carry out investment projects, either on their own or cooperating with the national government.

In the case of the Magallanes region, in the extreme south of the country, local authorities are promoting the potential of the remote area for initiatives in digital connectivity, port development and renewable energy.

To learn more about the projects that the Magallanes administration is lining up and how the role of the region's governments is taking shape in infrastructure development, BNamericas speaks with governor Jorge Flies.

BNamericas: What are the main investment projects being promoted in Magallanes?

Flies: I was intendant [a similar role to that of regional governor] during the second administration of president [Michelle] Bachelet and resumed as governor in this new process of regional governments. And from there a development plan was proposed.

We now have an agreement with the government to move to a permanent policy for extreme areas, and that allows us to look at the region and plan large-scale, long-term investments.

One of the most important characteristics of the Magallanes region is its remoteness, so connectivity is extremely important to us. That's why we are working on maritime, air, land and digital connectivity.

In the latter area, the Austral fiber optic highway has been completed, which allows us to connect under optimal conditions from Puerto Montt in Los Lagos region to Puerto Williams, which is the southernmost city in Magallanes.

In fact, Magallanes is the only region in the country where all the provincial capitals have fiber optic and 5G coverage. We're now in the last-mile stage, which requires an investment of approximately 5bn pesos [US$6.2mn], which we, as the regional government, transfer to the regional development secretariat, and that allows us to extend fiber optics in the region and to rural areas.

We're also conducting data collection for what will be the fiber optic from Puerto Williams to Antarctica. That's going to be a significant investment, probably several million dollars under the public-private model. The design of the cable itself and the management model for those who participate in this process are being drawn up.

In terms of ports, there are great prospects. We're in the midst of building the Puerto Williams dock on the land side, which involves an investment of 20bn pesos [US$25mn], the Bahía Fildes dock is also being built, which entails a similar investment.

Projections are also being done for what we call a port system in the Strait of Magellan. There's a deficit in the construction of ports in that shipping transit area and there's significant potential there with green hydrogen in the coming years.

We also need a pier to meet the tourist demand we have. Punta Arenas is the port with the most calls for tourist ships in Chile. Valparaíso has around 40 calls a year, while we have 120. We have a finished design and we're moving on to a stage of engineering consolidation for what will be a docking port in Punta Arenas.

The Chilean navy is also planning a dock in the region for its ships. We're going to have the largest ship made in Chile, the Antártico Viel, and along with that, three ports linked to green hydrogen are being developed. Two are tied to ENAP; Laredo, which will be for loading and unloading, and Cabo Negro for refueling.

Meanwhile, the companies linked to green hydrogen are projecting the largest port in Chile near San Gregorio in the Strait of Magellan itself, which is a port approximately 2km long with a 150m wall. That would be double the size of San Antonio.

With this, what we propose is a port system that can supply different needs.

BNamericas: You have suggested that Magallanes has great potential for public-private partnerships, but it has been said that the current concession law is designed only for large-scale or inter-regional projects. Have you considered the possibility that regional governments could propose their own infrastructure concessions?

Flies: The current concession law is limited to the public works ministry [MOP] through the concessions office. A regional government can't grant concessions, although it can be involved in the public investment. We can invest but not offer concessions for public infrastructure.

What we're currently discussing with the MOP is the plan for extreme areas and the programming agreements, to see what the best solutions are for the projects that I mentioned.

For example, ENAP needs to develop a design for Laredo port for the reception of material for green hydrogen. That design can be done through an agreement between ENAP and the regional government.

Another important aspect for the region is science and, in this respect, we have two scientific development platforms built in the region, and in March there will be a tender for the largest research center in the country with the international Antarctic center. That is the largest investment to be made in the region at approximately 80bn pesos [US$100mn] once the sums are updated.

BNamericas: You're also proposing new public transport systems for Magallanes, but it's one of the regions with the lowest population density in Chile and these projects require a certain projection of demand to be viable. How do you approach that problem?

Flies: Right now, we have the example of smaller cities in Europe, Asia and Oceania. In this respect, we want to take advantage of the region's renewable energy potential and electrify commuter transportation systems.

We're looking to install a tram system for the main route in Punta Arenas, which crosses the city from north to south. That would not only have the of reducing the use of private vehicles, but would also contribute to tourism, which is very important in the region.

We plan to start with a bus-tram, which instead of a train on a fixed line, would be an electric bus in the form of a tram, so it would be more flexible.

BNamericas: How does the role of the governor compare with the previous figure of the regional intendant?

Flies: The intendant included covered two roles. One was to represent the national government on the ground in the area of security and the other was the administration of the region.

The regional governor has all the powers of the intendant in the management and human development of the region, although with some advantages. The intendant had to carry out the program of the national government in his/her region, while the governor acts based on a program that was validated by the vote of the local community, which significantly changes the dynamics.

The intendants were also changed frequently. On average they only lasted a year and were replaced for political reasons. On the other hand, the governor has a relatively secure position for four years and can be reelected for a second term.

The possibilities we have as governors are much more powerful and more tangible than those we had as intendants. It's a very important step for the decentralization of the country.

BNamericas: In the case of the provincial governments in Argentina, they have their own agencies for roads and infrastructure, for example, that carry out tenders on their own. Do you think regional governments in Chile should have that kind of authority?

Flies: I think that they will become part of our powers in the long term, as greater capacities are developed and more experience is acquired in the field of carrying out infrastructure or the provision of other services that are sectoral in nature, such as housing and public works.

What we have now are mechanisms for cooperation and investment prioritization between regional governments and the national government. That's a healthy dynamic and allows for a long-term policy.

Regional and provincial capitals throughout Chile, as well as other areas, have the service.

The country has over 1.5mn 5G connections.