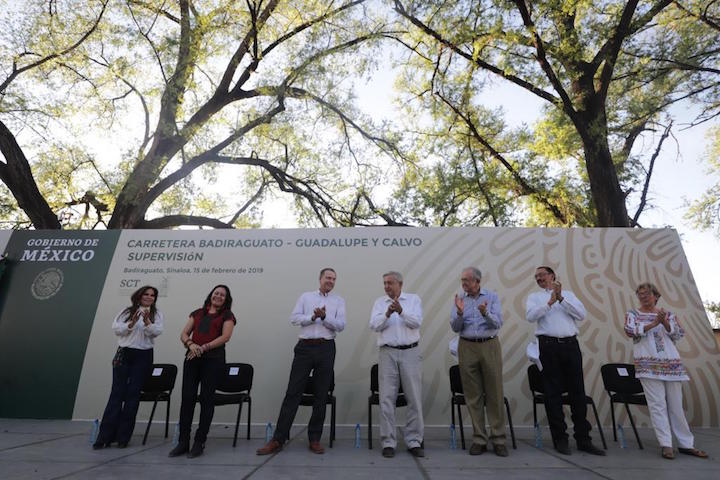 The projects are for remote areas in the Sierra Madre Occidental mountain range.

One of them entails upgrading a 524km road that will link Badiraguato, a town in Sinaloa state, to Guadalupe y Calvo, in Chihuahua, which forms part of an interstate highway.

AMLO (pictured) said on Friday that some 250mn pesos (US$12.9mn) have already been earmarked for the project this year, and pledged that federal funds will be available every year through the end of his term.

To date, 474km of the highway have already been modernized, with ongoing work on another 12.3km.

The funds earmarked for this year will finance rehabilitating another 5.5km of the highway. The relevant contracts are currently being tendered and work expected to begin on March 16, Jiménez Espriú said.

Enhancing the remaining sections of the highway will require investments of 1.23bn pesos, given the mountainous conditions of the road.

Once complete, travel times between Sinaloa state capital Culiacán and Hidalgo del Parral, a major city in Chihuahua, will fall from 27 to nine hours.

In Durango, AMLO said his government has earmarked 200mn pesos to conclude the construction of a road that links the localities of Tamazula and Canelas, also in the Sierra Madre Occidental, where only 20km remain incomplete.

"The governor [of Durango] started the construction of this project. Some 200mn pesos were already earmarked in the federal spending budget this year, but I commit to provide as many funds as necessary to complete it," AMLO said.

The president also said that funds will be allocated for a new bridge in the area.

This road forms part of a larger 280km highway corridor that links Tamazula to Los Herrera, also in Durango state.

Total investment will be 1.82bn pesos.

Work on 259km of the road have already been completed, with the 200mn pesos earmarked for this year financing another 5km.

Completing work on the remaining 15.7km will require investments of 500mn pesos.

The federal government earmarked 419mn pesos in this year's spending budget to continue the modernization of the Durango-Parral highway, as 190mn pesos will be used to complete a second beltway for the La Laguna region. An additional 800mn pesos will finance maintenance on federal highways crossing the state and some rural roads.

Some 200mn pesos will be invested to maintain the Durango-La Laguna non-toll highway.