AMLO's legal battle over Santa Lucía airport 'far from over' 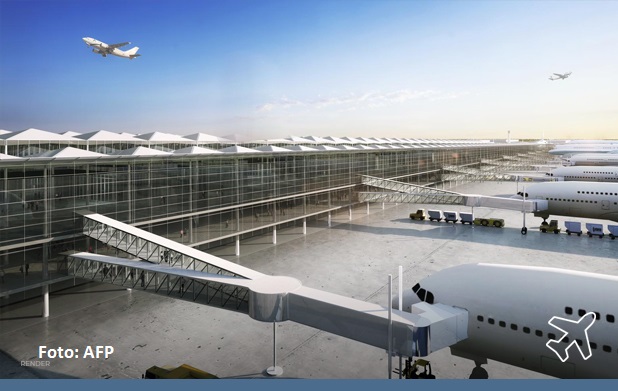 Although construction of the Felipe Ángeles international airport (AISL) at the Santa Lucía military airbase in Mexico state officially began on October 17, there is a long way to go before the project becomes a reality and the legal battle over the works "is far from over."

That is according to Rogelio Rodríguez Garduño, a law professor at the Universidad Autónoma de México (UNAM), who was speaking to BNamericas.

The Santa Lucía project, which is part of President Andrés Manuel López Obrador’s (AMLO) alternative to the now-canceled US$15bn airport to serve Mexico City that was under construction in Texcoco, was halted for almost three months by a group of citizens who managed to obtain seven suspensions on works after filing almost 150 appeals.

But all the suspensions were eventually lifted thanks to the help of the defense ministry (Sedena), which used the national security argument to sway judges.

As a result, AMLO's administration claimed victory in the legal battle that once clouded the future of the airport, and has set March 21, 2022 as the official opening date.

At the moment, the government has nothing blocking its way to building the airport. However, “the appeals are following their courses and what [the judges revoked] were only the suspensions,” said Rodríguez.

Revoking the suspensions “was only an act that unties the state's hands to do something it cannot do,” he added.

“The judges’ ruling can be challenged by any of the [plaintiffs],” Rodríguez said, pointing out that the citizens' collective #NoMásDerroches, which is supposedly behind all the appeals, can continue challenging the government’s plans, possibly taking them to the supreme court.

“This group, from a legal point of view, has the right to exhaust all the tools available that the law offers them, and what they chose was appeals,” he said.

The collective, whose members reportedly include investors whose plan to build the Texcoco airport was aborted by AMLO following an informal referendum, has remained silent since the last suspension was revoked, but they are expected to lodge further appeals.

"Although there are no judicial orders that prohibit the federal government from starting the works, the appeals continue and we will continue to litigate until all the cases are definitively concluded," the collective wrote on Twitter last week.

NEW AIRPORT OR AN EXPANSION?

“The president can symbolically launch construction of the airfield but the judge was told that it was not a new airport,” he said. “They are two different things.”

“The development of a military airbase is and will always be under all circumstances – judicial, constitutional and legal – a responsibility of Sedena, and civil [entities] should not interfere. That is why the judge lifted the suspension,” the law professor said.

“If what they are doing is a public airport, it requires a concession, it requires studies, it needs to prove its financial viability, where will the resources come from? How much will the project cost? Is the so-called airfield compatible?” Rodríguez said, adding that many other details are also needed.

When the AISL was originally proposed, the AMLO administration said it would add two runways – one 5.2km long and the other 4.6km – as well as 33 gates, roofed parking, a hotel with 310 rooms and a control tower to synchronize flights with Toluca and Mexico City airports, the other two arms of the government's plan to replace the Texcoco project.

An initial investment of 70bn pesos (US$3.6bn) was forecast for Santa Lucía, located northeast of the capital, an estimate that was recently upped to 75bn pesos.

Transport and communications minister Javier Jiménez Espriú, however, announced Monday that all documents regarding the Santa Lucía project will be made public in two weeks.

“If it is a [military airbase], as the judges were told, that cannot be known [publicly],” Rodríguez said.

The companies that will be involved in the project have not been revealed either, nor details of the tenders, but it is known that General Gustavo Ricardo Vallejo Suárez, of the federal civil aviation authority, will be in charge of construction.

Want to read more information about AMLO's legal battle over Santa Lucía airport 'far from over'?