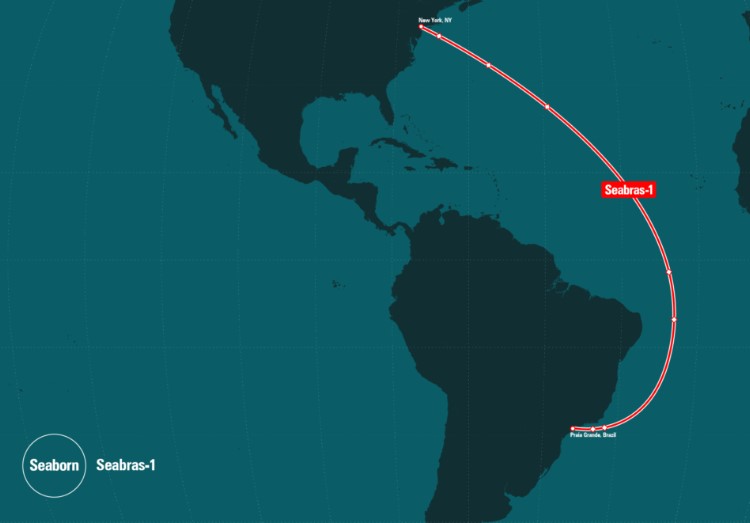 Submarine cable operator Seaborn is reassessing possible extensions and new branches for its Seabras-1 cable, which connects Brazil to the US.

The evaluations come in the wake of changes in market demands and as part of new corporate positioning by the group, Michel Marcelino, senior VP and head of Latin America, told BNamericas.

Activated in 2017, Seabras-1 connects the city of Praia Grande on the coast of São Paulo state to New Jersey in the US via a 10,500km route.

The company has boasted that Seabras-1 is the only direct route between the financial centers of São Paulo and New York, which ensures very low latency rates.

To begin with, Seaborn is no longer considering a 500km section of cable to Recife, the capital of Pernambuco state in Brazil's northeast, reversing plans previously shared with BNamericas by Andy Bax, former COO of Seaborn and currently CEO of EdgeUno, among others.

According to Marcelino, the Recife branch was initially considered because a group of investors and entrepreneurs had expressed interest in building a datacenter in the northeastern city.

Over time, however, neighboring Ceará state and its capital Fortaleza have become consolidated as the main landing point for submarine cables in Brazil’s northeast, benefiting from a more favorable geographic position and attracting a host of datacenters, points-of-presence (PoP) and internet exchange points to that region.

“Recife has always been a major economic hub in Brazil’s northeast. It has economic strength, a technology hub, a very strong medical hub. Pernambuco always looked at Ceará as a more touristic place, but Fortaleza has developed a significant interconnection ecosystem,” said Marcelino.

Seabras-1 was designed with seven branching units, that is, seven subsea points throughout the system from which an extension (split) could be made to create a new stretch and connect to new landing stations.

Two of these branching units were positioned off the US east coast, one in the Caribbean and four in Brazil. One of these Brazil branches was off the coast of Recife and the others were off Ceará, São Paulo and Rio de Janeiro.

“In the design phase of the Seabras-1 project, there was already interest on the part of the Pernambuco government to have a submarine cable arriving in Recife,” said Marcelino.

But a lot has changed since then.

In addition to Fortaleza's growth as an interconnection hotspot, Seaborn filed for Chapter 11 bankruptcy in the US during 2020, from which it only emerged six months later.

This process, however, led to the replacement of Seaborn’s management team and brought together all Seaborn and Seabras entities under the newly consolidated Seabras Group, with full ownership and management for the main investor and controller Partners Group.

“There was a strategic realignment of the Partners Group, looking at the infrastructure as a whole. Along with this, there was also a commercial impasse, natural in some situations, with the group of investors from Recife. With that, we decided to halt the process and also reevaluate our branching units in Brazil in the face of new demands and opportunities,” said Marcelino.

The Seabras-1 system comprises six pairs of fiber optics, four of which have been leased to third parties, leaving two pairs for Seaborn itself.

Because of that, Marcelino said that one or possibly two of the four branching units could be used for new cable stretches and landing stations by the company without necessarily depending on specific projects, as was the case in Recife.

“It's not just a matter of market demand, it's also a matter of technological constraints,” he added.

Seaborn is analyzing commercial opportunities and costs with major cable and equipment vendors to determine which, if any, branching units will be activated and how the company can then generate more value for the system as a whole, Marcelino said.

Contractually, Seaborn would have to rely on its original cable manufacturer, Nokia's Alcatel Submarine Networks (ASN), for any expansion, but Marcelino said other options in the project are being considered.

The executive expects that by the end of the current year Seaborn should have more clarity on whether or where any extensions will go ahead.

In the meantime, the company is expanding in Brazil, mainly through partners, having activated PoPs in Fortaleza, Salvador, Brasília, Curitiba, Porto Alegre, and Rio de Janeiro (this one including a teleport).

It also connected to more datacenters in the country, including those of Equinix in São Paulo, adding to the connections to the datacenters of Ascenty, Odata and Tivit, as well as to the private datacenters of Brazil's B3 stock exchange.

Seaborn has been certified as a carrier by B3 to provide international connectivity to global banks, traders and fintechs, among others.

Seaborn/Seabras also owns pairs of fiber in other systems, such as Monet and AMX-1. 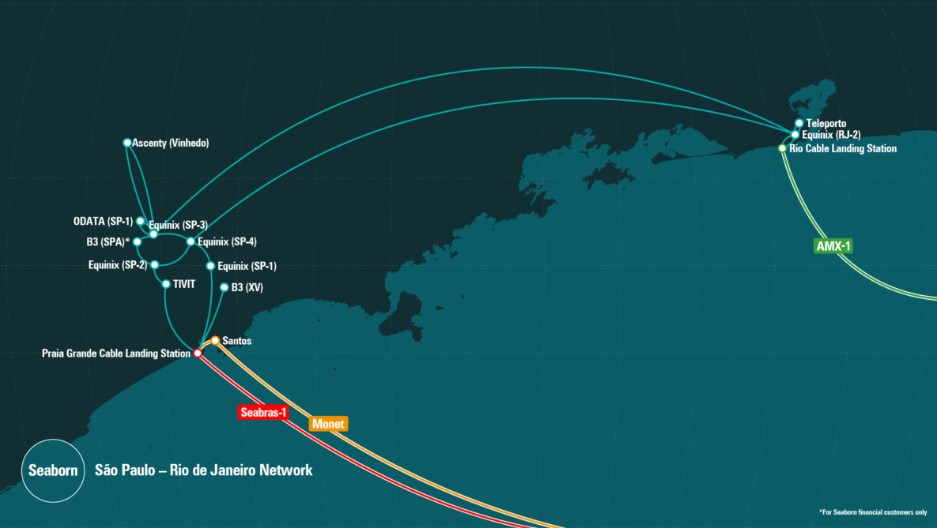