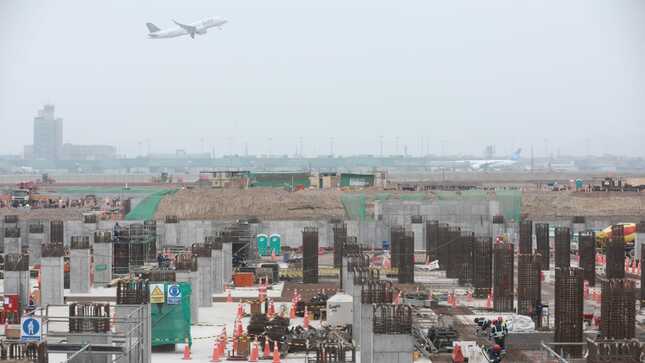 For safety and commercial reasons, Peru needs to urgently strengthen its airport infrastructure.

Two firefighters were killed at Lima's Jorge Chávez international airport (AIJC) when their truck was hit by a plane that was cleared for takeoff. Media reports said it was unclear why the truck was on the runway, but this recent episode highlights organizational and logistical shortcomings.

While the airport is being expanded, regional facilities lack modernization and are not on a par with others in the region. “Our per capita income is similar to that of Colombia, which should make us have an infrastructure like that country, but it is not like that,” Camilo Carrillo, infrastructure head of EY Perú, told BNamericas.

“For airports like Trujillo, Lambayeque and Piura, it takes about three years to approve the technical files for the runway and the terminal. If [transport and communications ministry] MTC does not approve them, it cannot be done,” he said.

Part of the problem is that works are carried out under PPPs and the State has to provide the investments but fails to pressure concessionaires to launch tenders.

To this adds a lack of human capital. “Not all airports operate 24/7. We have cases like the Talara airport – Piura region – that opens only five hours a day because there are no air traffic controllers that allow the service period to be extended,” Martín La Rosa, area manager for Peru and Bolivia at international air transport association IATA, told BNamericas.

“Cusco airport, originally designed for 3mn passengers a year, has received up to 4.2mn. Without a pandemic, up to 5mn would have been received [in 2020],” La Rosa said, adding that improved internal infrastructure is urgently needed to be prepared for the domestic flights that currently make a stopover in Lima.

Both Carrillo and La Rosa agreed that the airports serving Trujillo, Piura, Arequipa and Cusco, and the Cusco international airport (AICC) should be prioritized, as they are key for tourism.

Decentralization is seen as a solution. “First it is time to fix the house and then think ambitiously. Most countries boost their air traffic in one area and then divert it. We have the opportunity that Lima is geographically well located to connect with other airports in the region. From there we strengthen the rest,” La Rosa said.

According to specialists, AIJC has capacity for around 12mn passengers a year, but handled more than 25mn in 2019. “We hope that this 2022 the volumes will return to those of 2019; the airport had been growing at a rate of 8%,” according to La Rosa. The airport’s expansion to handle 37mn passengers per year is expected to be finished in 2025.

Although works advance, the comptroller general highlighted that airports and commercial aviation corporation Corpac is behind in equipment acquisition for the new tower and landing strips.

“If Corpac does not deliver the required air navigation systems and equipment on time, the start-up of the second post could be suspended for a time equivalent to the [delivery] delay,” the comptroller said in a statement. Delivery is scheduled for 2023.

Without strong State leadership, problems will only grow, Carrillo said. “When you have the new AIJC, it will collapse three years after it was inaugurated. The same thing is happening in the regions: the triggers [of necessary demand] of the contract have not yet been reached, but the State must not wait for an airport to collapse. Investment must be brought forward, especially since these processes take time.”

Carrillo added, “history shows that when you provide infrastructure, that automatically pulls demand. We are in a vicious circle in which there is not enough demand, and the MTC does not rush. But they are paying for the works, so they must speed up the pace for the benefit of all.”

In a meeting with a Korean delegation, it was highlighted that the aim is to expand bilateral cooperation between the two countries and reduce the ...

If 2020, a year marked by the health crisis, is not considered, last year saw the lowest amount since 2013.