Spotlight: The oil and gas port projects underway in Brazil 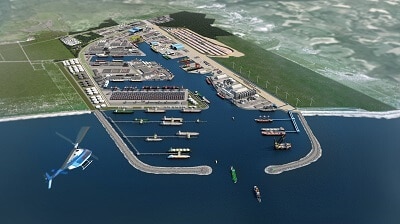 Projects to build new ports or expand facilities to support oil and gas activities in Brazil involve total investments of around 20bn reais (US$3.96bn), according to a report from waterway transport regulator Antaq accessed by BNamericas.

Most of these initiatives are taking place in Espírito Santo state in southeast Brazil, and are designed to carry out fuel handling and/or offshore support activities for oil and gas exploration and production (E&P) operations.

The highlight is the Porto Central terminal and industrial complex (pictured) in Presidente Kennedy, Espírito Santo, the capex for which is outlined at 6.2bn reais.

Scheduled to begin in the second half of the year, works on the first stage of the terminal include the access channel, southern breakwater, construction of two piers for the liquefied natural gas (LNG) and crude oil and derivatives terminals, quays for the container and general cargo terminals, and an offshore support base.

Meanwhile, Terminal Portuário Brites (TPB), to be located in Santos, São Paulo state, will have two berths to handle biofuels and oil derivatives. The capex forecast for the undertaking, whose environmental licensing process is underway, is 4.7bn reais.

Petrocity Portos is awaiting approval from environmental agency Ibama to begin construction of a port in São Mateus, Espírito Santo. With a planned investment of 3.2bn reais, the facility will have an offshore support base.

The São Luíz port private use terminal (WP Torres), in Maranhão state, will also have areas to handle hydrocarbons. With capex of 780mn reais, the undertaking is scheduled to go into operation in 2026.

In Manaus, Amazonas state, Terminal Portuário Novo Remanso is receiving 680mn reais in investments. It will be partially focused on handling oil derivatives and biofuels. The works have been delayed due to the COVID-19 pandemic and floods on the Amazon River, but are still underway.

In Aracruz, Espírito Santo, Imetame Logística plans to build a 632mn-real port that will be able to receive Suezmax-type ships for fuel operations. The works are currently suspended, awaiting the final procedures for the signature of a contract addendum with the government, which will allow the assignment of physical spaces in public waters.

In Candeias, Bahia state, GDK Engenharia will build a terminal to handle fuels and chemical products, such as gasoline, diesel, anhydrous alcohol, biodiesel, bunker, cryogenic ethane and naphtha produced from offshore oil and gas platforms. With capex of 457mn reais, construction of the project has not yet started due to legal conflicts.

Espírito Santo is also expected to host a terminal owned by Itaoca Terminal Marítimo, which will require 443mn reais in investments. The project involves the construction of berthing facilities for 12 supply boats and storage facilities. According to Antaq, the terminal owner has been facing various difficulties related to negotiations with investors and financiers to start the works.

Also in Açu, as of December 2021, Brasil Port Logística Offshore e Estaleiro Naval had invested 80% of the 604mn reais earmarked for a terminal for handling and storage of solid and liquid bulk cargo used in offshore E&P activities. According to Antaq, its implementation is running behind schedule because of the crisis in the oil and gas market and, more recently, the COVID-19 pandemic.

Want to read more information about Spotlight: The oil and gas port projects underway in Brazil?