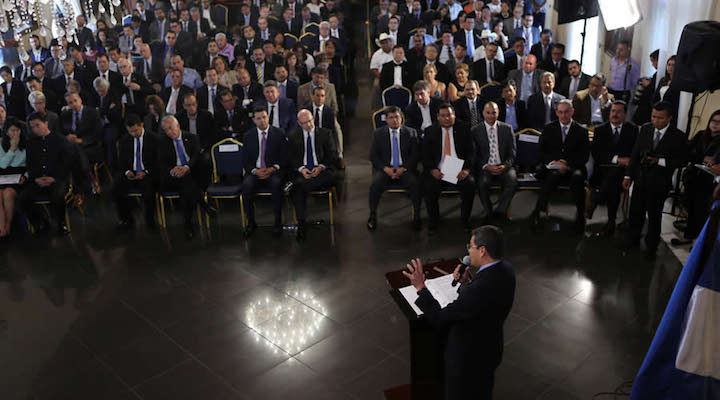 The creation of so-called employment and economic development zones (ZEDEs) in Honduras will produce investment opportunities in infrastructure projects, according to government officials.

During an event at the presidential palace in Tegucigalpa, President Juan Orlando Hernández and economic development minister Arnaldo Castillo presented the initiative to a group of international investors and representatives from the diplomatic corps in the country.

Inspired by China's special economic zones, the idea for the creation of the ZEDEs was first launched by the previous government in 2010. The ZEDE law was finally approved in congress in 2013 with the aim of boosting job creation and attracting foreign investment in different areas of the country.

At the event, at least eight major international firms expressed interest in investing in some of the zones, the Honduran government said in a news release.

According to official information, the government has already completed feasibility studies for the establishment of a ZEDE in Goascorá municipality in Valle department. The zone will be located near El Amatillo, a border crossing shared with El Salvador.

There are plans to build a dry port project there, which would require investments of US$210mn.

President Hernández said that this zone would also benefit the new international airport that is currently under construction in Palmerola, as the airport would become the main port of shipment of local goods and those coming from El Salvador and Nicaragua to markets in Europe, the US and Asia.

A second ZEDE would be built in Puerto Castilla, a port village located in the Trujillo municipality of Colón department. The projects to be built there include construction of a US$1.3bn electric power plant, a US$800mn gas production facility and a US$400mn refinery.

Another ZEDE would be built in the north of Olancho department to boost the area's agribusiness and tourism sector. The projects to be developed here include the construction of hotels, retirement communities and agricultural facilities.

In the department of Choluteca, the government is proposing the construction of a US$600mn gas production facility.

In Santa Bárbara department authorities are contemplating the construction of two power generation facilities with their corresponding dams, which would require an investment of US$870mn.

For Comayagua department, there are plans to build an agribusiness area at a cost of US$50mn. Other multi-million dollar investments are considered to boost production of fishing and meat products.

The last ZEDE on the government's list would be built in Islas de la Bahía, a group of islands off the coast of the country. Authorities have plans to build a hotel, housing and commercial complex on a private island, requiring an investment of US$253mn.

BNamericas provides a roundup of developments including a solar project call in Barbados and the advancement of an electromobility bill in Panama.

Honduras sanctions decree that stops the increase in electricity

President Hernández sanctions decree that stops the increase in electricity

Central America to add 1.2GW, led by gas to power