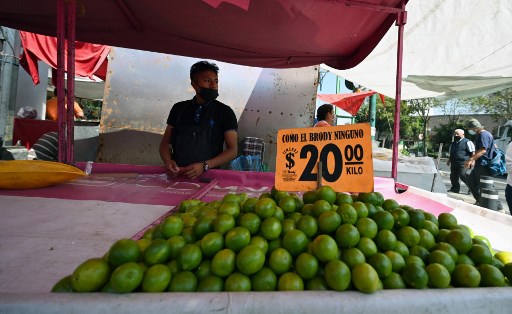 Mexico’s actions to regulate prices are helping to cushion blows from record inflation, but they can’t last forever, according to experts.

President Andrés Manuel López Obrador confirmed he is preparing a second round of measures to fight inflation, likely including subsidy-backed price caps, temporary regulations, and agreements with producers to limit the impact inflation has on consumers.

Yet, they are only temporary and “do not attack the roots of inflation,” adding that prices will eventually have “to recover from the lags accumulated.”

The second round of measures follows an initial program launched in early May to tamp down prices on 24 basic household goods, as well as a tax break and subsidies on fuel prices introduced in early March.

But price pressures are still increasing in Mexico, as they are around the globe.

Grupo Financiero Banorte estimates mid-June inflation will bring the annual CPI to 7.80% from 7.65%, reaching the highest level since January 2001. Statistics agency Inegi will publish the latest data on Thursday.

“I believe that these are very positive measures for the Mexican economy … regardless of the increases the [central bank] governing board decides to implement,” Alejandro Cervantes Llamas, Banorte’s head of economic regional analysis, told BNamericas.

The central bank will decide on the rate at its next meeting on Thursday. Analysts predict a hike of 75 basis points to 7.75%.

The price controls are highly important, Cervantes said, given that they come with continued controls on gasoline, diesel and LPG prices, in addition to a freeze on electricity rates.

“I believe that these policies of the federal government will not be modified in the short term, or at least by the end of this year,” Cervantes added.

Until then, the elimination of food import tariffs will build on the benefit of having been subsidized by source countries, such as US subsidies on wheat and other crops, helping to lower prices in Mexico as well, said Cervantes.

“Obviously, this favors the supply of food in Mexico, which is obviously going to have a positive impact on price dynamics within processed foods and agricultural goods,” he said.

He added, “public resources are limited and sooner or later the government will have to close those programs,” and when it does, “prices will realign and will probably do it with some virulence.”