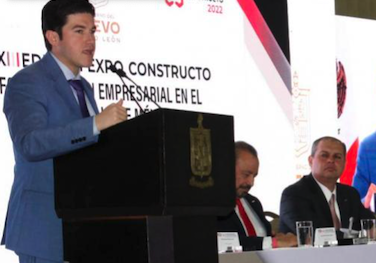 Governor Samuel García said funds will be used for key regional mobility and infrastructure works, adding his administration will become “the infrastructure government,” according to a press release.

While announcing the plan during the Expo Constructo event, he also said, “additionally, we will finish the Libertad dam with another 7bn pesos, and the hospital in García municipality for 6bn pesos.”

García said, “The resources that have been assigned and the estimations based on fiscal laws are painting a pretty positive picture and it is great that Nuevo León is highly regarded throughout the country.”

Works include rehabilitation and drilling of water wells as well as refurbishment and construction of water treatment plants for 30-40mn pesos.

He also promised to build 16 civil security facilities, eight for the national guard, and two for the army.

Other projects are the Colombia customs facility, reinforcing the metropolitan transit system (Sintram) trust and the C-5 and C-4 surveillance systems.

The Gloria-Colombia highway, the Interserrana highway, the Juárez-Allende peripheral highway, and the construction and rehabilitation of bypasses and sidewalks will also be financed.

García also highlighted the purchase of 1,600 buses for the metropolitan area, and the construction of rails for the metro system to double the amount that was built during the last 40 years.

The Mexican state has published several tenders to carry out preparation studies for an expansion to Tonalá municipality.