Argentine renewables: Getting the wheels of construction turning apace again

After accelerating in 2018-20, renewables capacity growth in Argentina has lost steam, impacted by credit access fallout among wider macroeconomic headwinds.

The engine that has chiefly driven the renewables sector is the RenovAr program, launched in 2016 to take advantage of the nation’s wealth of renewable energy resources by promoting private renewable energy generation via the auction model.

Some projects caught in the economic turbulence – which started to mount in 2Q18 – remain in limbo. The government recently introduced regulatory incentives to help get pickaxes swinging again at stalled projects facing penalties for failing to meet contractual obligations.

Success in this sphere is vital if Argentina wants to meet goals under law 27,191, which establishes, among other things, the objective of at least 20% participation of renewable energy sources in the electricity matrix by 2025 – a proportion that is now around 11-12%.

Three solar parks and a wind farm, along with smaller projects, scheduled to go into operation in July-September, will expand Argentina’s non-conventional renewable energy (NCRE) park by 434MW. New NCRE capacity due to come online next year is expected to be less than half of that commissioned in 2021, based on current forecasts.

Much hinges on dangling the right carrots and market conditions.

To find out about the state of play and more, BNamericas spoke with Adolfo Durañona, managing partner at global law Baker McKenzie´s Buenos Aires offices.

BNamericas: Regarding the RenovAr program in Argentina, what is the current situation? Could you give us a brief overview?

Durañona: We believe that the RenovAr program has been positive for the country. In addition to the good outcome concerning participation in the program, a scheme was proposed that has generated positive results despite the macroeconomic difficulties and the speed of meeting generation objectives. The evidence is the growing participation of renewables in the energy matrix.

The challenge rests in consolidating this upward trend, enabling the completion of projects that have not yet obtained the commercial green light and sufficient capacity with respect to transportation needs. Project financing remains a challenge. 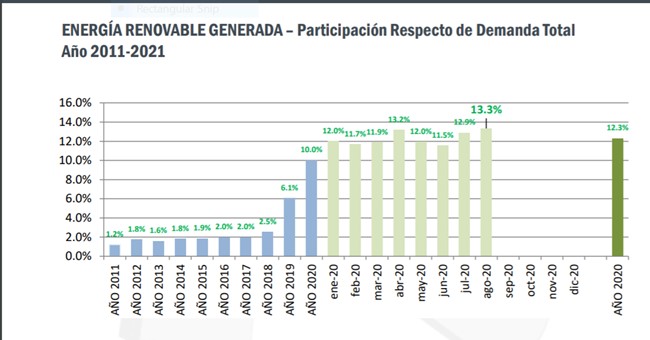 A September 2021 report from wholesale power market administrator Cammesa. Of the electricity generated, 76% is from wind and 10.9% solar.

BNamericas: In August, the government announced measures that modify terms regarding extensions and fines corresponding to the RenovAr program. What is the purpose or goal of these measures?

Durañona: The objective is to try to make viable projects that were affected by the country's macroeconomic situation – restrictions on access to the exchange market, which restricted the payment of loans, dividends, imports, et cetera – and by the effects of the pandemic.

As a result of such announcements, the energy department issued resolution 551/21, which modified the guarantees on renewable energy projects under the term market – Mater – model. This is the market between private parties, which encourages large users to buy renewable energy directly from generators. Also, it was intended to free up transport capacity in favor of the latter.

It is a measure that provides an incentive to the sector and affirms commitment to meet the generation objectives committed to under [renewable energy promotion] law 26,190 – and its amendments. Like all general rules, there are aspects that are not covered or that do not meet the needs of all projects, but we believe that it is a move in the right direction and that, in addition, other measures could be taken to promote the development of renewable generation. We understand that measures are being evaluated to address RenovAr projects on stand-by which, among other things, would free up transport capacity, which is one of the demands of the sector.

BNamericas: Do you think that the measures are sufficient for suspended projects to advance in their construction, or are there other relevant factors at play that also have to be addressed, such as the macroeconomic situation and access to credit?

Durañona: As mentioned before, we believe that the direction is correct but, without doubt, there are macroeconomic issues that, if normalized, resolved or addressed in general or for the sector, could make a big difference.

These issues not only affect the generation sector but also all other areas that complement it, mainly the different types of demand. Once that demand, especially industrial, normalizes to pre-pandemic levels, the real challenge will be to create an environment conducive to growth and stability that allows the regular and sustained development of the sector.

On the other hand, with projects in need of long-term financing, supplies from overseas and stability, such as renewables, there are aspects such as interest rate reductions, tariff updates, the flow of foreign exchange, and standardized import processes that would help to conclude the ongoing projects and implementation of others, both in the sphere of Mater and distributed generation.

BNamericas: Argentina has clearly experienced problems in the development of its renewable energy sector. But nonetheless, it appears that the sector has quite a bit of potential. What do you think?

Durañona: Yes, we believe that it has potential due to the characteristics and climatic conditions but also due to other industries that could be generated, such as green hydrogen. Argentina has had its hydrogen law for many years and, although recently there seems to be an interest on the part of the government to explore its development, nothing in fact has happened in this regard.

BNamericas: Could you estimate when we may see more action in the renewable sector in Argentina?

Durañona: It is difficult to estimate a timeframe. But this process will definitely be gradual as the macroeconomic factors mentioned previously normalize.

Beijing’s ambassador to Chile said that while his country does not have an associated investment strategy, green hydrogen – along with renewables a...

BNamericas speaks with Daniel Vilches, head of the province’s main bus and light rail operator, about the financing obstacles that the expansion of...

Want to read more information about Argentine renewables: Getting the wheels of construction turning apace again?